Gesturing is a powerful tool for children’s math learning

Children who use their hands to gesture during a math lesson gain a much deeper understanding of the concepts and methods discussed, according to new research from University of Chicago’s Department of Psychology. 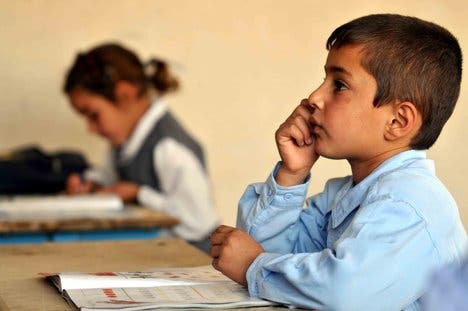 It’s already a pretty much accepted fact that gesturing accentuates children learning – it was already established by several studies that gestures help children learn – and many believe the same goes for scientists. This study in particular was designed to answer whether abstract gesture can support generalization beyond a particular problem and whether abstract gesture is a more effective teaching tool than concrete action.

“We found that acting gave children a relatively shallow understanding of a novel math concept, whereas gesturing led to deeper and more flexible learning,” explained the study’s lead author, Miriam A. Novack, a PhD student in psychology.

In order to verify this idea, researchers taught third-grade children a strategy for solving one type of mathematical equivalence problem, for example, 4 + 2 + 6 = ____ + 6. They also gave them a few similar problems to verify their understanding.

Then, they randomly assigned 90 children into three different groups: in the first one, they used different kinds of physical interaction with the material. They had, for example, magnets with numbers, and they had to place the magnets on a whiteboard to solve the problems. The second group mimed that action without actually touching the tiles, and a third group was taught to use abstract gestures with their hands to solve the problems. For example, they were taught to make a V gesture with their fingers under two of the numbers, metaphorically grouping them, followed by pointing a finger at the blank in the equation.

After this, all the children were tested to see which, if any group performed better. In the first step, they were asked to solve the exact same problems as in the “training” – and all three groups did a really good job. But when it came to similar, but different equations, the ones in the third group fared significantly better. This shows that they developed a better general understanding on the concepts taught, which translates, basically, into better learning.

“Abstract gesture was most effective in encouraging learners to generalize the knowledge they had gained during instruction, action least effective, and concrete gesture somewhere in between,” said senior author Susan Goldin-Meadow, the Beardsley Ruml Distinguished Service Professor in Psychology. “Our findings provide the first evidence that gesture not only supports learning a task at hand but, more importantly, leads to generalization beyond the task. Children appear to learn underlying principles from their actions only insofar as those actions can be interpreted symbolically.”

The study, “From action to abstraction: Using the hands to learn math,” is published online by Psychological Science.