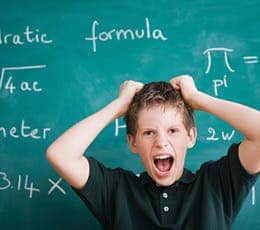 For many of us, mathematics comes with a feeling of anxiety, not while actually performing math, but beforehand in anticipation. Why some people dread math is an interesting question that deserves a systematic, scientific answer – some other time, however. Recently, I came about an equally interesting study, that analyzed how the brain perceives the fear of math. The findings showed that the anxiety experienced in anticipation of math is associated with the experience of physical pain.

Mathematics has only evolved as a distinct branch of study available to the masses a few centuries ago. Actually, only in the past 150 years or so following education reforms that spurred in Europe did mathematics and its concepts become widely introduced to the public. Society has benefited a great deal from wide spread mathematical knowledge, despite most of its students loathed it. It’s rather clear then that the human brain hasn’t evolved a specialized brain structure dedicated to math anxiety and that the same feeling must come from some other brain function associated with this fear.

To find out which part of the brain is responsible for math anxiety, psychologists devised a series of questions, which they named Short Math Anxiety Rating-Scale, or SMARS. The study volunteers, 28 in total, had to answer these question while a MRI brain scan was performed at the same time. The quizzes were math related in part, while others were focused on verbal skills. Their actual performance was of little significance for the researchers, however – what they were looking at was anxiety.

In order to trigger anxiety, the scientists flashed some colours that warned the participants that math question was following (yellow circle). To fight off extraneous signals, the psychologists managed to pinpoint the differences between people experiencing discomfort while performing math and those while anticipating math. This allowed them to correct their results accordingly.

At the end of their study, the researchers found a limited number of brain regions associated with the math anxiety, the strongest signals coming from the bilateral dorso-posterior insula, an area deep in the core of the brain. The researchers showed when anticipating an upcoming math-task, the higher one’s math anxiety, the more one increases activity in this region of the brain. On the contrary, when getting signaled that a word test was coming, participants actually dropped activity in the insula by a significant margin.

This region of the insular has been documented in the previous studies to be associated with the experience of physical pain. Actually, it’s quite possible to induce the experience of pain simply by stimulating the insula.  Interestingly, this relation was not seen during math performance, suggesting that it is not that math itself hurts; rather, the anticipation of math is painful.

Also, the authors of the study recently published in the journal PLoS one have also confirmed that math anxiety is linked with poor math performance when answering the questions. The value the study provides is that it might explain why people with high anxiety and little tolerance for math behave this way, stirring them away from taking math classes or even entire math-related career paths.