First discovered in a bomb crater, the Mithraeum has had a long journey back underground.

by Alexandru Micu
in Archaeology, History, News, Science
A A

An ancient Roman temple dedicated to the god Mithras has been restored to its original site — seven meters (23ft) below ground — by the Bank of England.

During its heyday, ancient Rome forged an extensive and highly cosmopolite empire. Their conquests took them from Africa and Spain to England and the Middle East, but their diplomats, traders, and emissaries took them as far as ancient China.

It may be easy to forget today, but London is a Roman city, a heritage that the City of London is celebrating by re-animating the ruins of one of the most important ancient temples in the city — the Mithraeum. First discovered in 1954 in a World War II bomb crater, the ruins have been restored to their original place 7 meters (23 ft) below ground level and brought back to life with sounds, lights, and a misty finish.

London’s Mithraeum was built in the third century to honor the god Mithras, a Persian-inspired deity which during the 1st to 4th centuries AD were very popular with military personnel. It was an all-male cult, and the temple, built next to the River Walbrook, was a prime gathering point for believers.

Lost to the mires of time, the temple was re-discovered in 1954 and became an overnight public sensation, with front-line news and tens of thousands of people coming to see it every day. The temple was dismantled and moved 100 meters (330 ft) away so that the public could visit while post-war rebuilding works continued on the site.

The ruins have now been moved back and restored to their original spot beneath Bloomberg’s European headquarters, a stone-throw away from the Bank of England. The 7-meter-long ruins have been reconstructed with low lights and audio effects, to simulate the atmosphere and Latin chatter one might’ve heard during the Mithrians’ rituals or celebrations. The original temple’s walls were re-created using sheets of light.

“London is a Roman city, yet there are few traces of its distant past that people can experience first-hand,” said Sophie Jackson, the project’s lead archaeological consultant.

“This really was one of the most important discoveries in London, if not in Britain, in the 20th century.” 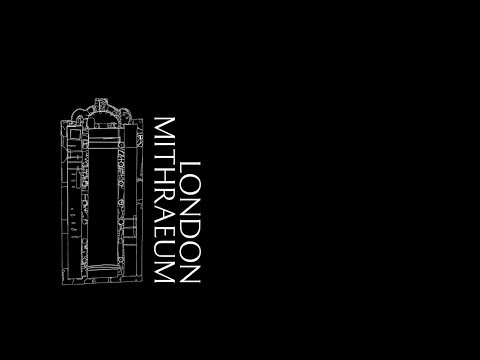 A six-month dig performed before the Bloomberg building was constructed uncovered the larges cache of Roman artifacts ever found in London. More than 15,000 objects were recovered including jewelry, brooches, shoes, animal bones, and pottery, offering a unique glimpse into the lives of Roman Londoners. The digs also unearthed a wooden tablet from January 8th, 57 AD — marking the earliest handwritten document ever found in Britain.

The London Mithraeum opened last week and is free to visit.