Human hair found in fossilized hyena poop suggests that ancient humans were sometimes on the menu of other animals. 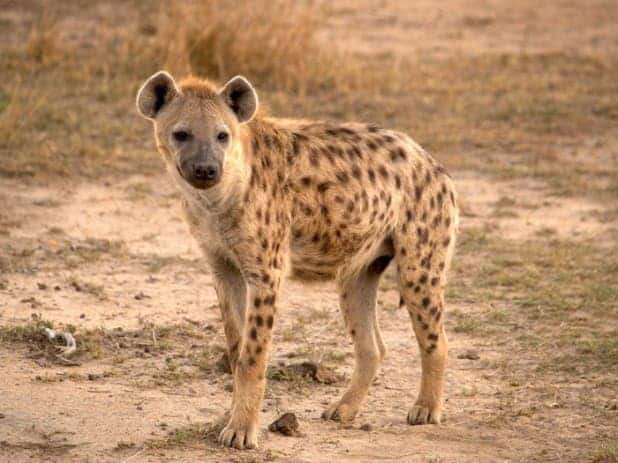 The fossilized dung, part of a “hyena latrine,” will be described in the upcoming October issue of the Journal of Archaeological Science; the sample has been subjected to a number of tests. The sample is about 257,000 years old.

“Based on the fossil hairs identified here, this research has established that brown hyenas shared the Sterkfontein Valley with hominins, warthog, impala, zebra and kudu,” authors Phillip Taru and Lucinda Backwell of the University of the Witwatersrand wrote. They continued, “Apart from humans, these animals are associated with savanna grasslands, much like the Highveld environment of today.”

However, while this is definitely possible, it doesn’t necessarily mean that the hyena hunted and ate a man – it’s just as likely for the animal to scavage the human body. Also, perhaps the hyena somehow consumed a blob of human hair. Hey, it happens – if it’s hungry, it tastes all sorts of things. Either way, the finding confirms inland occupation by archaic Homo sapiens or modern humans. But there’s another useful clue:

“A lack of hair scales has been documented in human hair subject to pathology, a condition observed when studying our diabetic colleague’s hair as part of the human comparative sample,” Taru and Backwell explained.

But life in a cave provided for many a hair days:

“Abrasion of the hair resulting from inhabiting rock crevices” could have led to lack of scales, according to the authors.

It’s impressive to me just how many things we can find out from some hair in poop. Future investigations will likely focus on the same region in an attempt to find out more about human lifestyle 257.000 years ago.