It's strangely beautiful, even though we're talking about a dreaded pathogen.

by Tibi Puiu
in Diseases, Health & Medicine, Science
A A

For a long time, scientists have presumed that HIV infects hosts through sexual transmission by crossing the genital mucous membranes. However, it’s one thing theorizing a model, and another thing actually seeing the process in action. Now, for the first time, researchers in France have shown live how the virus infects immune system cells in an in-vitro model of the urethral mucosa.

Morgane Bomsel, a molecular biologist at the Institut Cochin (INSERM, CNRS, Paris Descartes University), along with colleagues, introduced an infected T cell into the urethral mucosa. The cell was tagged with a fluorescent-green protein in order to track its progress. Bomsel and colleagues then recorded how the T cell came into contact with the epithelial cell of the membrane when a virological synapse formed.

In the videos, you can see how this encounter spurs production of the infectious HIV virus, seen as green fluorescent dots. Then, like the neon green ray of a blaster gun in some B-grade SciFi movie, the virus sheds across the synapse into the mucosal epithelial cell. 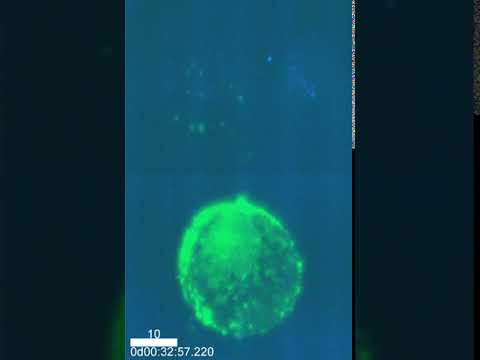 This video shows a top view of an HIV-infected cell (green) in contact with the urethral epithelium and beginning to form a burst of viruses.

Once the virus crosses the epithelial layer via transcytosis, the HIV is engulfed by immune cells called macrophages. After an hour or two, once the virus has been produced and shed, the cell contact ends and the infected T cell moves on.

“Infected cells, once contacting the epithelium as if it is seating comfortably on it, start to spill a string of viruses like a gun does with bullets. After shedding a salve of fluorescent viruses on the mucosa that lasted a couple of hours, the infected cells decided to detach and turn away like a goodbye,” Bomsel told ZME Science. 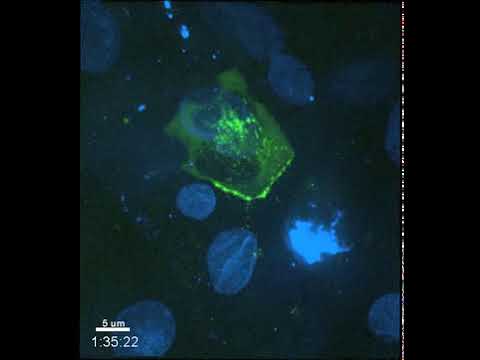 This video shows a top view of an HIV-infected cell (green) in contact with the urethral epithelium and forming viruses. A virological synapse forms between them and virus is shed by the HIV-infected cell.

The French researcher confessed that it was “beautiful to see these populations of different kind of cells interacting together at the microscopic levels,” even though we’re talking about a pathogen as dangerous as HIV.

One of the most surprising findings, though, was that the infected T cells targeted epithelial cells directly above macrophages. This suggests there’s an interaction between the macrophages and the epithelium, which no one had predicted before. 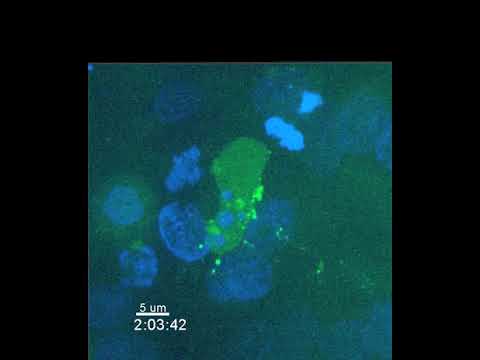 This video shows an HIV-infected cell (green) that has already formed a synapse with an epithelial cell. The virus then starts to shed. When all the virus has been shed, the infected cell leaves.

The macrophages that consumed the HIV continue to produce and shed the virus for 20 days, after which the cells enter a latent, non-virus-producing state. However, the virus is still stored in macrophage reservoirs in the genital tissue. This explains why it’s so challenging to treat HIV. Antiretroviral therapies can keep the HIV reservoirs latent but interrupting therapy will cause the infection to rebound and continue spreading.

In light of these recent findings — which describe a precise mechanism of HIV entry and early establishment of HIV reservoirs in tissue macrophages — perhaps a vaccine active at the mucosa level could avoid an HIV reservoir formation if it is administered early upon infection.

“With our model and the detailed kinetic knowledge of how reservoirs are infected, new drugs that could potentially eradicate these reservoirs might now be established and tested,” said Bomsel.

The team of researchers is already working to find ways of purging the reservoir. They’re testing a “shock and kill” strategy where a macrophage-specific agonist is coupled to mucosal antibodies specific to the HIV surface. The plan is to activate the HIV reservoirs in the macrophages so these become visible to the immune system.