by Tibi Puiu
in Animals, Science
Reading Time: 2 mins read
A A
Share on FacebookShare on TwitterSubmit to Reddit 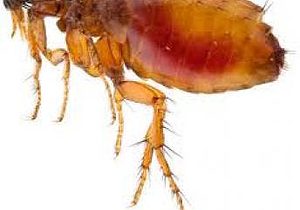 During the tumultuous  Cretaceous and Jurassic periods if you could only choose one word to describe the world, it would’ve certainly be ‘big’. Big dinosaurs, big plants, big trees, big fish and big insects, of course. Chinese scientists have found almost perfectly preserved fossils of two previously unknown extinct flea species in Inner Mongolia, which are roughly ten times the size of modern fleas and were adapted for sucking dinosaurs’ blood. These fleas were giant by all of today’s standards, and very mean.

“These were insects much larger than modern fleas and from the size of their proboscis we can tell they would have been mean,” said George Poinar, Jr., a professor emeritus of zoology at Oregon State University, who wrote a commentary on this find.

“You wouldn’t talk much about the good old days if you got bit by this insect,” Poinar said. “It would have felt about like a hypodermic needle going in – a flea shot, if not a flu shot. We can be thankful our modern fleas are not nearly this big.”

Today 94 percent of the 2,300 known species of fleas attack mammals, while the remainder feed on birds. However, 160 million years ago, the Pseudopulex jurassicus and Pseudopulex magnus fleas had a different menu – dinosaur. The creatures had bodies that were flatter than those of present-day fleas, like a bedbug or tick, as well as long claws that could reach over scales on the skin of dinosaurs so they could hold onto them tightly while sucking blood, compared to modern fleas which are more laterally compressed and have shorter antennae, and are adapted to move quickly through the fur or feathers of their prey.

“These are really well-preserved fossils that give us another glimpse of life into the really distant past, the Cretaceous and Jurassic,” said Poinar, who has also studied “younger” fleas from 40-50 million years ago preserved in amber.

Something of their likes have never been encountered so far, and while the newly discovered giant flea species might be the ancestors of modern fleas, the researchers believe most likely they belong to a different lineage all together.  It would be interesting to find out if these giant fleas were something more than a pest to dinosaurs, and whether they plagued more damage than just a nasty itch. Modern fleas have been a known carrier of deadly disease, responsible for spreading the black plague which killed a third of the Europe’s population in the middle ages.

The findings were reported in the journal Current Biology.