It's a song of ice and fire - scientists have just witnessed the eruption of the Big Ben volcano in the sub-Antarctic area.

by Mihai Andrei
in Geology, News, Science, Videos
A A
Share on FacebookShare on TwitterSubmit to Reddit

It’s a song of ice and fire – scientists have just witnessed the eruption of the Big Ben volcano in the sub-Antarctic area.

Big Ben is a volcanic massif in an Australian territory in the southern Indian Ocean. It is a composite cone with a diameter of approximately 25 kilometres, reaching up 2,745 m above sea level. The volcano is located some 4,099 kilometres (2,547 miles) southwest of Perth in Western Australia, being one of the most remote areas in the world. It’s so remote that humans haven’t set foot on it in almost 30 years. 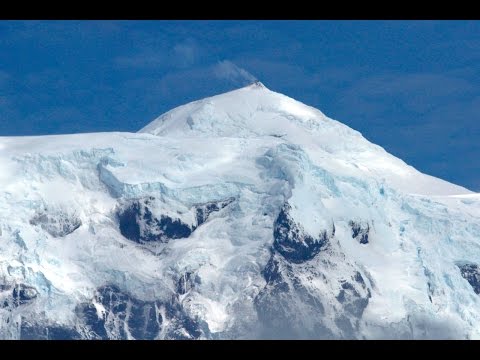 Volcanic activity at the spot has been confirmed since 1881, with eruptions being noticed from satellite in the 1990s and 2000s. Now, scientists on board Australia’s CSIRO research vessel, Investigator, on a voyage to the Kerguelen Plateau were lucky enough to observe the eruption from up close.

“Seeing vapour emanating from both of Australia’s active volcanoes and witnessing an eruption at Mawson Peak have been an amazing coda to this week’s submarine research,” said the voyage’s chief scientist, Mike Coffin of the Institute of Marine and Antarctic Studies. “We have 10 excited geoscientists aboard Investigator, and our enthusiasm has spread to our 50 shipmates.”

Investigator is circling the islands on the sub-Antarctic Kerguelen Plateau to study how volcanoes on the seafloor mobilize iron which enriches the water and supports life in the Southern Ocean; plankton heavily benefits from this iron, often resulting in local blooms. Jodi Fox, a PhD candidate in Earth Sciences at the University of Tasmania fulfilled a long-held ambition:

“I’m doing my PhD on Heard Island volcanism, and to see lava emanating from Mawson Peak and flowing down the flank of Big Ben over a glacier has been incredible. Given persistent cloud cover and generally foul weather, I didn’t think we’d even see Mawson Peak on this voyage,” Ms Fox said.