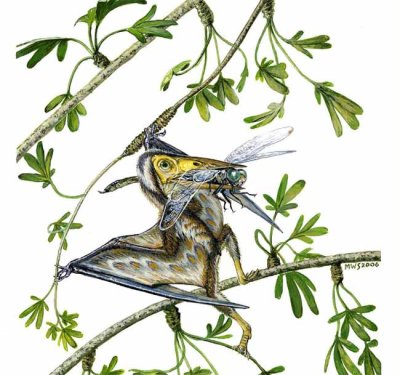 The pterodactyl derives from the word Pterosaurs, which means “winged lizard”. Pterodactyl means in fact “winged finger”. When you hear about them, you think about some huge, majestic creature, gliding and searching for its next victim. Don’t think that way any more!

A fossil suggests that about 120 million years ago, a pterodactyl so small you could hold it in your hand glided in forest canopies in northeastern China where it feasted on insects. They discovered an almost complete skeleton of such a lizard, called Nemicolopterus crypticus.

With a wing envergure of 10 inches (25 centimeters), this half-pint represents the smallest pterosaur ever found.

“The animal is a very young animal, but it’s not a hatchling that just left the egg,” said researcher Alexander Kellner of the Department of Geology and Paleontology at the Museu Nacional/Universidade Federal do Rio de Janeiro. “Therefore it is the smallest pterosaur ever found.”

The study of this fossil led to the conclusion that a lineage of Nemicolopterus-related creatures led to all of the giant pterosaurs, including Quetzalcoatlus, which boasted a wingspan of more than 30 feet (10 meters); maybe you shouldn’t stop thinking that pterodactyls were huge.

“The general idea was at some point we had these very primitive pterosaurs — very low down on the evolutionary tree — that were living on insects,” Kellner told LiveScience. “At some point pterosaurs learned to feed on fish.”