Imagine salmon in reverse: long-snouted Bandringa sharks migrated downstream from freshwater swamps to a tropical coastline to spawn 310 million years ago – leaving behind a fossil nursery, which researchers found. 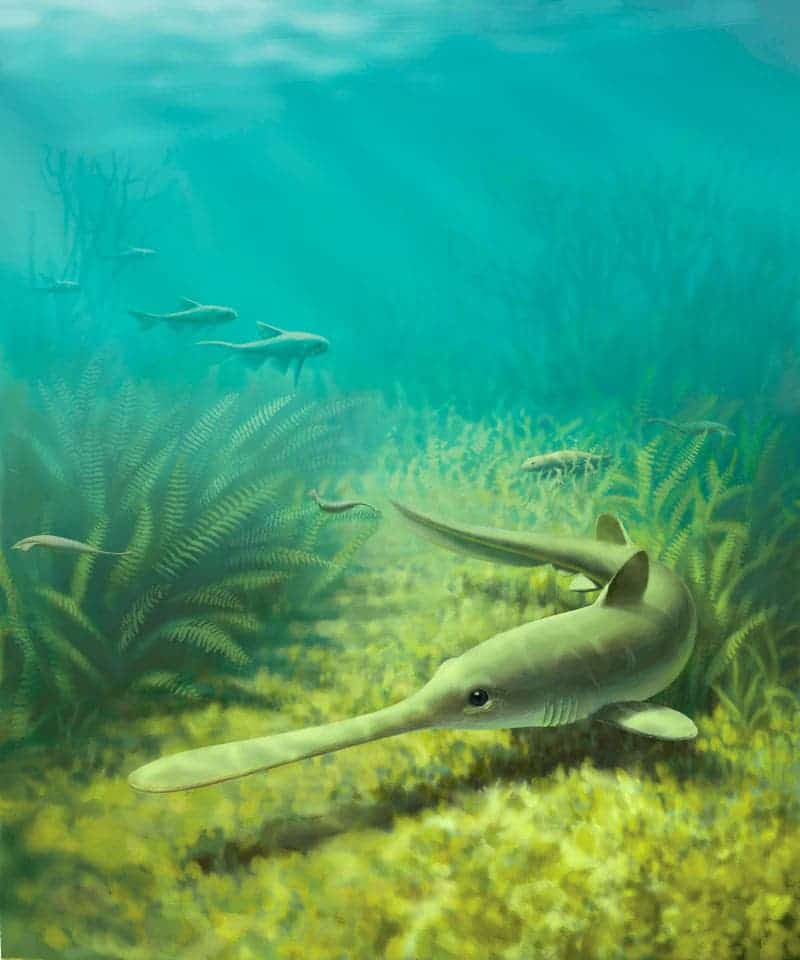 The surprising conclusion was drawn by University of Michigan paleontologist Lauren Sallan and a University of Chicago colleague; they analyzed every known specimen of Bandringa, a bottom-feeding predator that lived in an ancient river delta system in what is today the Upper-Midwest (keep in mind though that the face of the Earth was very different at the time, due to tectonic shifts).

“This pushes migratory behavior in sharks way back,” said Sallan, an assistant professor in the U-M Department of Ecology and Evolutionary Biology. “These sharks bred in the open ocean and spent the rest of their lives in fresh water. No shark alive today is known to do that.”

The Bandringa shark (which currently doesn’t even have a Wikipedia entry) is likely one of the earliest close relatives of modern sharks. It greatly resembles today’s sawfish and paddlefish, with a spoon-billed snout up to half its body length. When they were fully grown, they could reach sizes of over 3 meters (approximately 10 feet). The first fossil specimens were discovered in 1969, and since then, they became one of the most prized specimens. They lived exclusively in freshwater swamps and rivers, according to Sallan and Michael Coates from the University of Chicago. If their conclusions are correct, then bandringa females traveled downstream to the shallow tropical coastline to lay their eggs in the salt water – a reverse situation from today’s salmon migration.

Most sharks are ovoviviparous, as opposed to fish, which are generally oviparous; this means that instead of laying the eggs in the water, the eggs hatch in the oviduct within the mother’s body and that the egg’s yolk and fluids secreted by glands in the walls of the oviduct nourishes the embryos. However, bandringa was oviparous.

All the Bandringa fossils from the Mazon Creek marine sites are juveniles, and they were found alongside egg cases – the protective capsules that enclose the eggs. The females came, they laid their eggs and then left – that’s why no mature fossils were found. Meanwhile, the juveniles spawned from their eggs and tried to make their way upstream. Some made it, some didn’t.

“This is the first fossil evidence for a shark nursery that’s based on both egg cases and the babies themselves,” Sallan said. “It’s also the earliest evidence for segregation, meaning that juveniles and adults were living in different locations, which implies migration into and out of these nursery waters.”