How some dinosaurs got enormously long necks

The longest creatures to ever walk the Earth were the long-necked, long-tailed dinosaurs known as the sauropods. But why did these huge vegetarians grow such huge necks, reaching up to 15 meters? That’s six times longer than that of the current world-record holder, the giraffe.

“They were really stupidly, 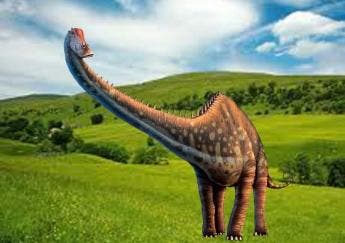 absurdly oversized,” said researcher Michael Taylor, a vertebrate paleontologist at the University of Bristol in England. “In our feeble, modern world, we’re used to thinking of elephants as big, but sauropods reached 10 times the size elephants do. They were the size of walking whales.”

The secret, according to him and his team was mostly hollow neck bones. To find out just how sauropod necks could get so long, scientists analyzed other long-necked creatures and compared sauropod anatomy to that of their closest living relatives – birds and crocodiles.

“Extinct animals — and living animals, too, for that matter — are much more amazing than we realize,” Taylor explained. “Time and again, people have proposed limits to possible animal sizes, like the five-meter (16-foot) wingspan that was supposed to be the limit for flying animals. And time and again, they’ve been blown away. We now know of flying pterosaurs with 10-meter (33-foot) wingspans. And these extremes are achieved by a startling array of anatomical innovations.”

Unsurprisingly, Taylor and his colleagues found several adaptations that supported long necks. The most notable feature was that air often made up 60 percent of these animals’ necks, with some of them as light as birds bones, making it easier to support the giant lengths. The muscles, ligaments and tendons were also positioned in a way that helped maximize leverage, making neck movements more efficient. Furthermore, their giant torsos and four-legged stances helped provide a stable platform for their necks; in contrast, giraffes have really small torsos compared to the rest of their bodies. The number of vertebrae was also important: while most mammals (with the exception of the sloths and manatees) have maximum 7 vertebrae in their necks, sauropods had 19 (which is still not that much comparing the sizes). 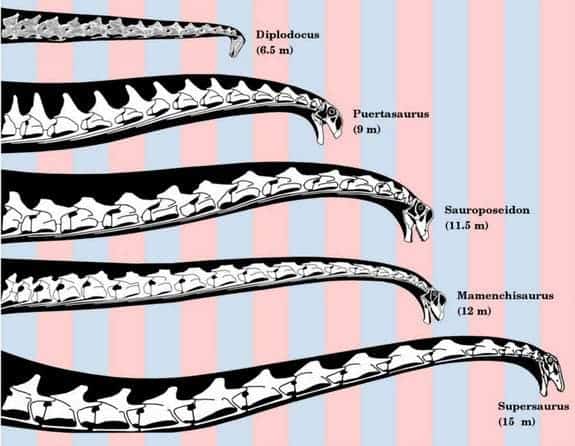 Another interesting fact which enabled them to grow such big necks was their small head size; sauropods didn’t even had cheeks to store food for chewing. As a matter of fact, they didn’t even chew food, they just swallowed it and let the gut digest it.

“Sauropod heads are essentially all mouth. The jaw joint is at the very back of the skull, and they didn’t have cheeks, so they came pretty close to having Pac Man-Cookie Monster flip-top heads,” researcher Mathew Wedel at the Western University of Health Sciences in Pomona, Calif., explained. “It’s natural to wonder if the lack of chewing didn’t, well, come back to bite them, in terms of digestive efficiency. But some recent work on digestion in large animals has shown that after about 3 days, animals have gotten all the nutrition they can from their food, regardless of particle size. And sauropods were so big that the food would have spent that long going through them anyway,” Wedel said. “They could stop chewing entirely, with no loss of digestive efficiency.”

But the question remains: why did they evolve like this? Well, there’s no clear answer so far, but there are three theories: either to reach leaves from high trees, either to graze large portions of vegetations by sweeping, with lower effort or… because it made them more sexually attractive. Taylor’s research however, didn’t provide an answer for this question.