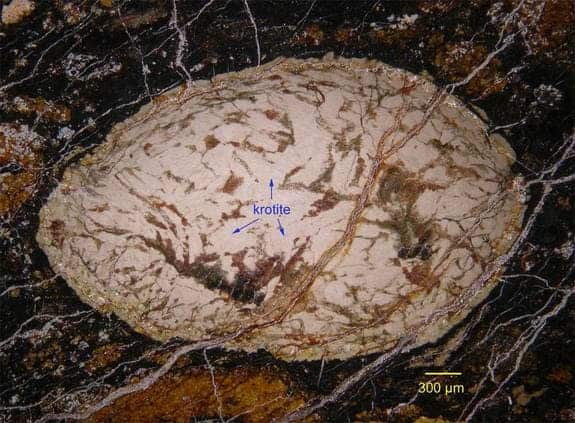 A recently analyzed 4.5 billion years old meteorite yields one of the oldest minerals known in our solar system: krotite. The mineral is not actually new, in that it was thought to be only a man-made constituent of some high-temperature concrete, according to study researcher Anthony Kampf, curator of Mineral Sciences at the Natural History Museum of Los Angeles County (NHM).

“This is one that simply was not known in nature until we found it here,” Kampf told LiveScience. “That’s pretty dramatic.”

The mineral is a compound of calcium, aluminum and oxygen, and it needs an estimated temperature of 1500 degrees Celsius to form, which supports the idea that it was created in the early solar system, as the solar nebula condensed and planets started to form.

“This meteorite likely came from an asteroid in the asteroid belt,” leader researcher Chi Ma of Caltech stated.