by Mihai Andrei
in Art, Geology, Great Pics, Technology
Reading Time: 3 mins read
A A
Share on FacebookShare on TwitterSubmit to Reddit

Fulfilling the job that scientists and unlucky undergrads have been doing for years, the kinetic machine Jller selects and sorts pebbles found on a 6 1/2 x 13 foot platform into a grid organized by geologic age. Without any assistance, the machine analyzes rocks based on their shape and sizes, understand their correct placement and transports them to the right place on the grid. 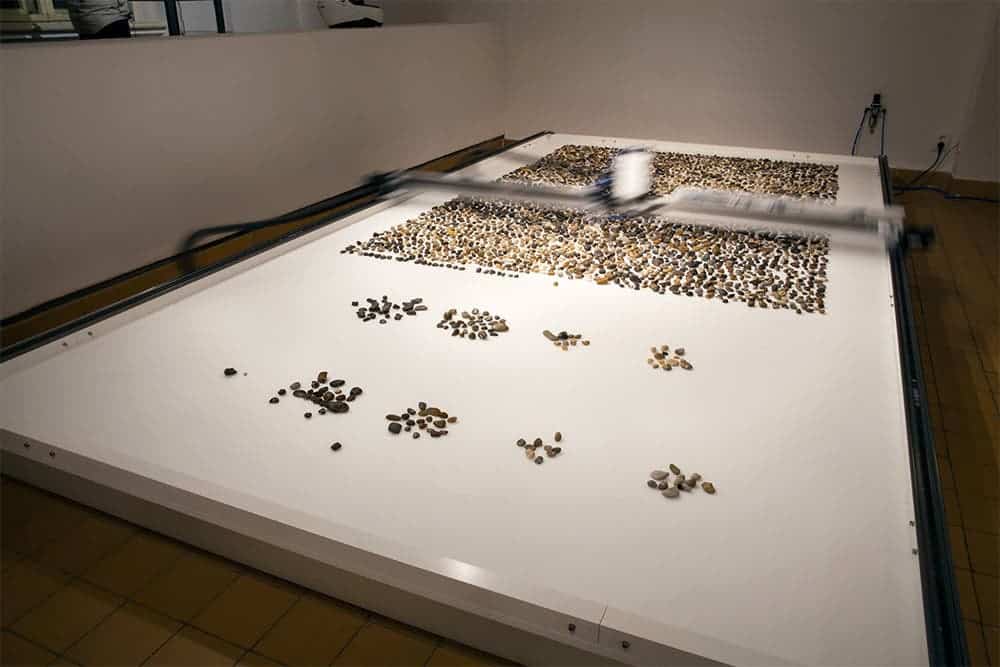 As automation is starting to take over several industrial activities, it’s also making a strong case in science.The project is part of ongoing research in the field of industrial automation and historical geology, and was presented last December as a part of the exhibition “Ignorance” at Ex Post in Prague. Of course, this only works for a very specific and local context. All the rocks here were taken from a German river of the machine’s own name, most of them being rounded pebbles eroded by the water and glaciers of the Alps. The geological history of the river valley is well known, and therefore it’s fairly simple to date the rocks by age. Jller’s creators, Benjamin Maus and Prokop Bartonicek write:

“The origin of those stones is well documented. For instance, the ones from the river Jller derive from two origins. Some come from rocks, that are the result of erosions in the Alps and are carried in from smaller rivers. Other stones have been ground and transported by glaciers that either still exist, or existed in the ice ages. As the Alps and flats, that were once covered by glaciers, have shifted, even deeper rock-layers were moved and as a result, stones from many geologic periods make their way into a river.” 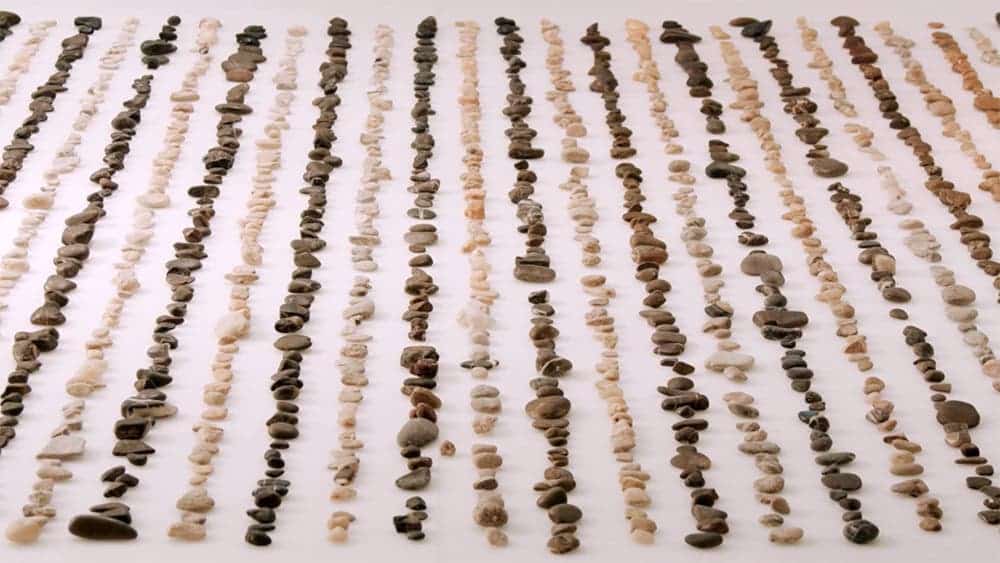 The sorting takes place in two stages. Firstly, intermediate, pre-sorted patterns are formed first, to make space for the final, ordered alignment of stones, defined by type and age. Jller analyzes an image of the stone it selects, understanding its color composition, lines, layers, patterns, grain, and surface texture. The machine then places the stones in alignment of age and type.

“When the history of a river is known, the type of stone can be directly related to its geological age. One very common sedimentary rock is the dark grey limestone from the Triassic period (225 million years ago). It was formed from the layers of sediments in the primeval ocean. Granodiorite, on the other hand, is an igneous rock of volcanic origin from the Tertiary Period (30 to 40 million years ago). Between those types there is a variety of metamorphic rocks, created by the transformation of existing rock types through the influence of temperature and pressure over time. Furthermore, a small amount of pebbles are formed by non-rock materials like red brick or slag, that have their origin in the Anthropocene.”

The machine could be extremely useful because this work, while not particularly complicated (if the geological setting is well known) can be very time-consuming. Geologists often spend time classifying and identifying rocks and fossils. Machines like this could save a lot of time and effort, allowing scientists to focus on more subtle and challenging tasks. But for now, the machine is part of an artistic exhibition – which is still a start, I suppose. The full presentation video can be seen below:

All photos via prokop bartonicek.