A fossil of a small, forest-floor-dwelling animal called Megaconus puts a big question mark on the evolution of mammals – it suggests that its group predated animals, while another one, from its tree dwelling ‘cousing’ Arboroharamiya shows the group belonged to the mammals.

The two fossils have paleontologists scratching their heads, not knowing where to place them in the family tree. A team analysing one fossil claims that the group belongs in mammals, but researchers looking at the other propose that its evolutionary clan actually predates true mammals. The situation requires more analysis, and, as both teams agree, more fossils.

Interestingly enough, both species were previously unknown to science; both are members of the haramiyids, a group of animals that first appeared around 212 million years ago first studied in the 1840s. Until now, the only available fossils of this group of animals were isolated examples of distinctive teeth and a single jawbone. But both fossils described today include not only the distinctive teeth, but also vertebrae and bones from the limbs, feet, and even tails.

“It’s remarkable, for such an incredibly obscure group, to have two fairly complete skeletons pop up at the same time,” says Richard Cifelli, a vertebrate palaeontologist at the Oklahoma Museum of Natural History in Norman, who co-authored a related News & Views3. “These new fossils change everything.”

The first fossil lived about 160 million years ago in (what is today) Northern China, being well adapted for life in the trees; it easily climbed and had exceptionally long digits. Its bones also suggest it had a tail.

After investigating the fossil and its evolutionary relationships, the team concluded that the animal is well in the mammal tree, and suggested that mammals, as a group, first appeared somewhere between 228 million and 201 million years ago.

Arboroharamiya probably preferred feeding on seeds, but it was omnivorous. 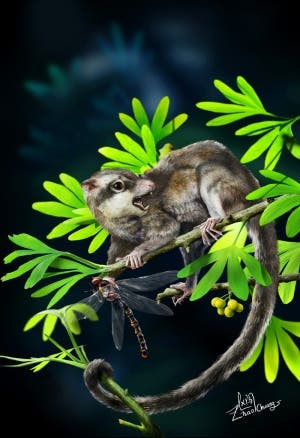 The second fossil was found in today’s Mongolia and probably lived on the forest floor: in each of its rear legs, the two lower bones were fused together at the top and bottom, similar to those of the modern armadillo.

Unlike Arboroharamiya, ground dwelling Megaconus and its evolutionary relationships suggest that the common ancestor of all extant mammals lived about 180 million years ago — and that the haramiyids, including Megaconus, branched away from the family tree some 40 million years before the true mammals evolved.

But here’s the kicker – neither one of the two creatures and interpretations fills in with the current mammal family tree! Megaconus and Arboroharamiya may or may not be mammals, and they may or may not be related – but they’re really shaking a big chunk of what paleontologists thought they knew about mammals.