by Mihai Andrei
in Geology, Shorties
A A

The earthquake that struck southern Maine was felt in New England as well as Connecticut, but as far as reports tell us, there’s no significant damage, and not even a single injury.

According to USGS, the earthquake had a meager magnitude of 4.0, despite initial estimates of 4.0, but this doesn’t necessarily mean it couldn’t be dangerous. The earthquake seems interesting especially considering how earthquakes are pretty rare in that area, and there’s no major fault system that crosses the zone. 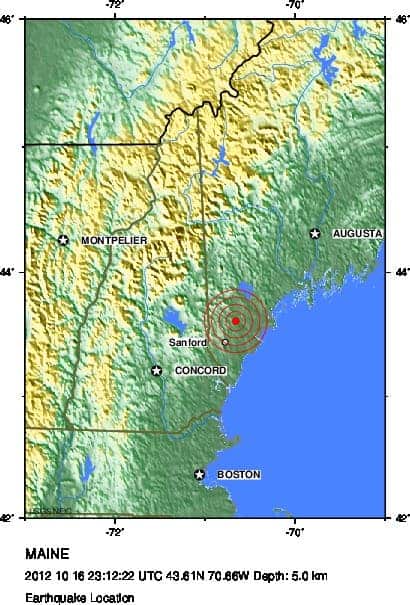 The strongest earthquake recorded in Maine had a magnitude of approximately 5.7, and took place in 1904. Just so you can make an idea, the magnitude is a measure of the earthquakes energy in the hypocenter, and it is a logarithmic measure – so a magnitude 5 is 10 times stronger than a magnitude 4. The earthquake in Japan that took place last year had 100.000 times more energy.