by Tibi Puiu
in Geology, World Problems
Reading Time: 3 mins read
A A
Share on FacebookShare on TwitterSubmit to Reddit 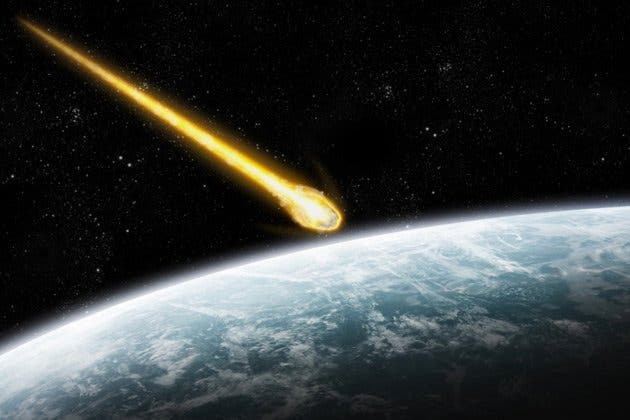 The current leading theory that explains the mass extinction of the dinosaurs – once the dominant group of animals on Earth for millions of years – states that an asteroid impact some 65 million years ago brought their demise, wiping them out along with 70% of all life on the planet. A new study, however, suggests based on sedimentary analysis that the cosmic body that impacted Earth at the time may have been a comet, not an asteroid.

The site of the impact size was previously identified as being the 180 kilometers wide Chicxulub crater in Mexico. Scientists believe that a slow-moving, large asteroid created this crater, however a recent investigation that looked at other telltale signs of the impact in the Earth’s sedimentary layers suggests that the cosmic body was actually a fast-moving, low mass rock – most likely a comet.

This conclusion came after the researchers found a discrepancy in the levels of iridium and osmium. These two elements can be found on the same worldwide layer of sediments, called the Cretaceous-Paleogene (K-Pg) boundary, and have been found to reside in much greater concentrations than those of other sedimentary layers, meaning they must have come from outer space.  After comparing the two, the scientists suggest the collision deposited less debris than has previously been supposed.

So, this means that the cosmic body had a much smaller mass than it is currently believed. At the same time, the huge 180 km-wide crater in Mexico could have only been created by a high velocity impact in order for the same amount of energy to be displaced. Comets, which are huge bodies of ice, dust and rocky particles, become thus the likeliest candidates since they travel at faster velocities than asteroids through the solar system.

“You’d need an asteroid of about 5km diameter to contribute that much iridium and osmium. But an asteroid that size would not make a 200km-diameter crater,” said ” Jason Moore, from Dartmouth College in New Hampshire.

“So we said: how do we get something that has enough energy to generate that size of crater, but has much less rocky material? That brings us to comets.”

A comet instead of an asteroid?

The findings however are far form being solid, and as one can imagine the study was met with skepticism by the geology and paleontology scientific community.

“There’s a possibility that a lot of the impacted material could have been ejected at escape velocity, so we couldn’t find it on Earth,” said  physicist Brandon Johnson of Purdue University, who was not involved in the research.

Geologist Gareth Collins of Imperial College London, U.K., agreed. “Geochemistry tells you — quite accurately — only the mass of meteoritic material that is distributed globally, not the total mass of the impactor,” Collins said, adding, “To estimate the latter, one needs to know what fraction of the impactor was distributed globally, as opposed to being ejected to space or landing close to the crater.”

The findings presented by the team lead by Dr. Moore rest on a rather fragile string. At the basis of their conclusions lies this previously mentioned correlation between the displaced debris and cosmic rock size. Collins believes that the debris distributed on Earth could have been less than 20% of the body’s mass, instead of 75% as the comet impact favoring researchers presume. In response, the authors  cite recent studies suggesting mass loss for the Chicxulub impact was between 11% and 25%.

The findings were presented at the 44th Lunar and Planetary Science Conference.