by Mihai Andrei
in Alien life, Geology, Science
Reading Time: 2 mins read
A A
Share on FacebookShare on TwitterSubmit to Reddit

The moment many of us have been waiting for is almost here: Curiosity prepares to make its first contact with a Martian – a Martian rock, that is. 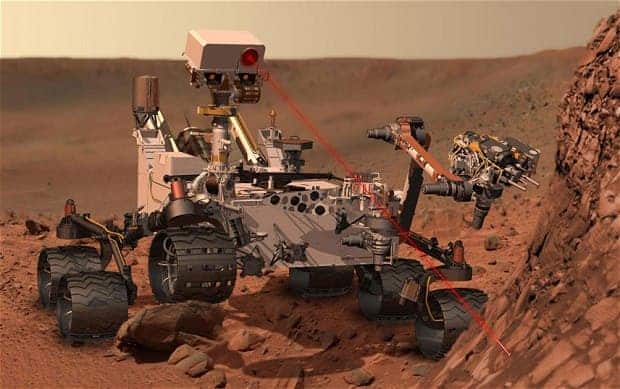 The rover has been on the Red Planet for six weeks now, still preparing its devices, namely its Alpha Particle X-Ray Spectrometer (APXS) which will be used to analyze rock composition. Powered by 0.7 milligram of radioactive curium, APXS first irradiates samples with alpha particles (which are just nuclei of helium atoms), to make them sensitive to the chemical analysis it will perform.

“We’re now at a point where we want to start to do some surface-contact science,” mission project manager Richard Cook of the NASA Jet Propulsion Laboratory in Pasadena, Calif., said during a September 19 teleconference.

Now, Curiosity is heading towards the Glenelg geologic site, where multiple terrains meet; mission personnel analyzed the site and decided it was definitely worth a first stop, especially as a certain rock seems to be quite uniform. The idea is to crosscheck the measurements from APXS against those of those from the rover’s ChemCam instrument, which has a smaller field of view.

“The hope is that we can analyze this rock and do some cross-comparisons between the two instruments,” Grotzinger said. “Not to mention it’s just a cool-looking rock.”

The rock has been named Jake Matijevic – a member of the rover team, who died sadly, just two weeks after landing, following “a lifelong battle with asthma and other upper respiratory ailments”.