by Mihai Andrei
in Astrophysics, Science
Reading Time: 2 mins read
A A
Share on FacebookShare on TwitterSubmit to Reddit 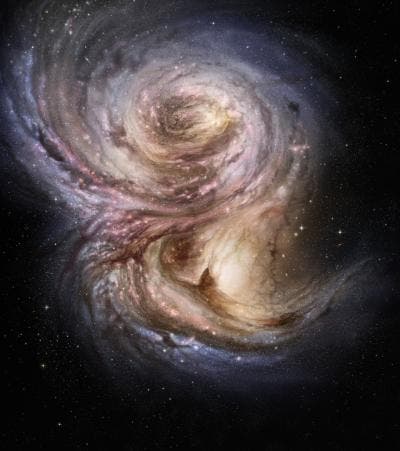 Early galaxies were very different from those we see today – it was overgrown black holes, and not stars that lit them up, claims a new study; in it, it is suggested that these obese black holes were numerous and bright enough that we should be able to detect them now, billions of years after they shone.

But if we’re dealing with this kind of black holes, one can only wonder – were they born fat, or did it just happen gradually? They could have been born obese, from massive clouds of atomic hydrogen, up to a hundred million times as massive as the Sun, which collapsed into themselves.

Now Bhaskar Agarwal at the Max Planck Institute for Extraterrestrial Physics in Garching, Germany, and colleagues say we should be able to see if this was indeed the case – galaxies with few stars, each dominated by a giant black hole lit up by the same mechanism that illuminates quasars.

Could the same mechanism which powers up quasars light the early black holes? Through a combination of computer simulations and mathematical analysis, Agarwal and his collaborators suggest that there may have been many such obese black hole galaxies just a few hundred million years after the big bang.