The math behind a snowflake

by Mihai Andrei
in Home science, Mathematics
A A 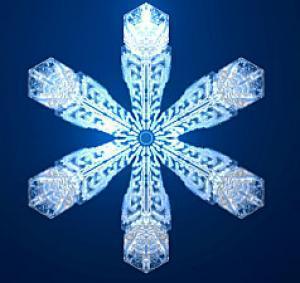 Snowflakes have fascinated most of us since the beggining of time. They say that there are no two snowflakes alike and that isn’t very far away from the truth. No two snowflakes are truly alike, but they can be very similar to each other, said Janko Gravner, a mathematics professor at UC Davis.

Now he and other scientists from UC Davis have developed a computer program which creates three dimensional snowflakes. Their nature is intricate and incredibly variable which makes them beautiful and a constant source of fascination for mathematicians as well as other people. In fact they have been a source of mistery since 1611, when Johannes Kepler predicted that the six-pointed structure would reflect an underlying crystal structure.

The process in which they are formed is pretty simple; they grow from water vapor around a sort of nucleus, such as dust. The surface of the growing crystal is a complex, semi-liquid layer where water molecules from the surrounding vapor can attach or detach and also water molecules are more likely to attach at the concavities in the crystal shape. The computer program they created takes these things into consideration, as well as other things, such as temperature, atmospheric pressure and water vapor density. It takes about 24 hours to produce one “snowfake” on a modern desktop computer.

They discovered some strange structures, such as a “butterflake” that looks like three butterflies stuck together along the body. There is no reason for these not to exist in the nature except for the fact that they are very unstable. A surprise was to see that the three-dimensional structure is often important, with complex structures often growing between two plates and this was very hard to observe with natural snowflakes.