by Mihai Andrei
in Home science, News
Reading Time: 4 mins read
A A
Share on FacebookShare on TwitterSubmit to Reddit

At least in the US, there is a huge difference between what the general public thinks and what scientists think – and this is a big problem.

Science is at the core of any nation – it influences the economy, the public life, the health… pretty much everything – everybody agrees on this; but despite this agreement, the beliefs of people who are actually doing the science and the general public drastically differ on many issues. 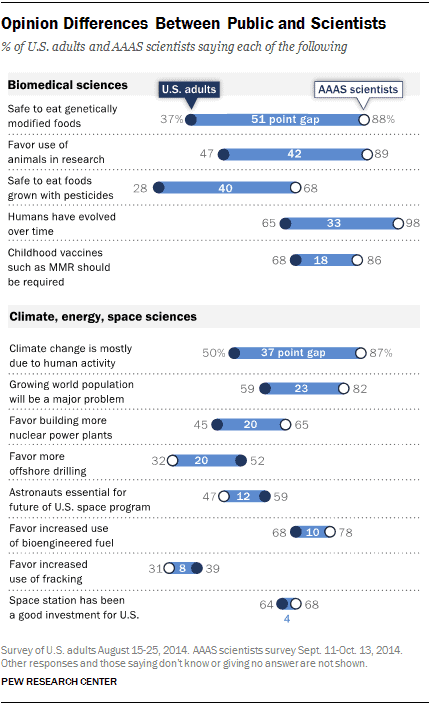 The public is very concerned about genetically modified foods, while scientists show almost no concern; the public is not really convinced that evolution is real, while for virtually all researchers, that’s a certainty. The public is split on climate change, while scientists are certain we’re doing it – these are huge differences on very hot topics. In 8 of 13 science-oriented issues, there was a 20-percentage-point or higher gap separating the opinions of the public and members of the American Association for the Advancement of Science.

“These are big and notable gaps,” said Lee Rainie, director of Pew’s internet, science and technology research. He said they are “pretty powerful indicators of the public and the scientific community seeing the world differently.”

Everybody agreed that science is crucial for the nation’s success. 79% of adults say that science has made life easier for most people and a majority is positive about science’s impact on the quality of health care, food and the environment. There is also a general agreement that investing in engineering and science pays off in the future.

There also seems to be a general feeling that the US government isn’t investing enough in science, technology, engineering, and math (STEM subjects) in grades K-12. Despite feeling that the US is at the top or close to the top of scientific innovation globally, only 16% of AAAS scientists and 29% of the general public rank U.S. STEM education for grades K-12 as above average or the best in the world. As a matter of fact, 46% of AAAS scientists and 29% of the public rank K-12 STEM as “below average.” 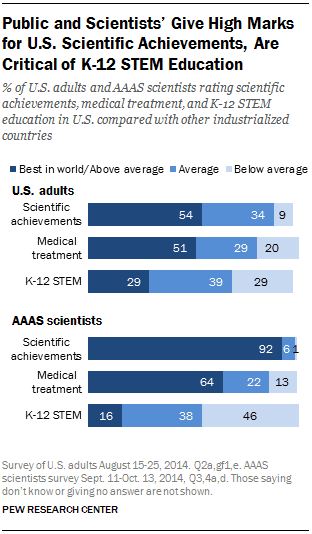 However, when it came to actual scientific topics, the similarities ended. The biggest gap between scientists and the public is with GMOs. Just 37% of US adults think that genetically modified organisms are generally safe, contrasting with the opinion of 88% of scientists. A similar difference was reported for animal testing.

Evolution was also an interesting subject. About two thirds (65%) of all adults thought that humans evolved, but among scientists, there was basically a consensus – at 98%. The numbers for mandatory vaccinations were pretty similar (68% vs 86%).

When it came to energy, both scientists and non-scientists showed a lack of favor for hydraulic fracking (at 31 and 39 percent respectively), but the general public supported more offshore drilling (at 52%), something which scientists didn’t agreed with. They did, however favor building more nuclear plants, as it wouldn’t heavily impact the climate and poses very small risks.

But why does this difference emerge?

“On the whole, as compared to most members of the public, scientists are likely drawing from a larger scientific knowledge base — and thinking more scientifically — about each of these issues,” George Mason University communications professor Edward Maibach said in an email. “Therefore, their views appear to be more in line with a completely dispassionate reading of the risks versus the benefits.”

The problem is that the belief of the general public has a big influence on what policies are implemented – sometimes even above what the science says. Needless to say, this can cause significant problems.

“Citizens are still broadly positive about the place of U.S. scientific achievements and its impact on society, but slightly more are negative than five years ago. And, while a majority of scientists think it is a good time for science, they are less upbeat than they were five years ago. Most scientists believe that policy regulations on land use and clean air and water are not often guided by the best science”, the report reads.

Just 15% of scientists believe that policies about land and water use follow the best science; general optimism has also gone down. 52% of AAAS scientists say this is generally a good time for science, down 24 percentage points from 76% in 2009.

All in all, a sizable opinion gap exists between the general public and scientists on a range of science and technology topics – something which should, at the very least, give policymakers something to think about.

You can read the full report here.