How culture migrated and expanded from city to city in the past 2,000 years

Using nothing but birth and death records, sociologists at North­eastern Uni­ver­sity  developed a working framework that details the migration patterns of some of humanity's most notable intellectuals in North America and Europe in the past 2,000 years. The data allowed the researchers to iden­tify the major cul­tural cen­ters on the two con­ti­nents over two millennia. Rome, Paris, London and New York are some of the world's prolific cultural centers in history.

Using nothing but birth and death records, sociologists at North­eastern Uni­ver­sity  developed a working framework that details the migration patterns of some of humanity’s most notable intellectuals in North America and Europe in the past 2,000 years. The data allowed the researchers to iden­tify the major cul­tural cen­ters on the two con­ti­nents over two millennia. Rome, Paris, London and New York are some of the world’s prolific cultural centers in history.

A history of culture

The researchers extensively relied on big datasets, like the Gen­eral Artist Lex­icon that con­sists exclu­sively of artists and includes more than 150,000 names and Free­base with roughly 120,000 indi­vid­uals, 2,200 of whom are artists. Using network tools and complexity theory, the researchers drew migration patterns that helped paint a broad picture of how culture converged and migrated from hub to hub, retracing the cultural narratives of Europe and North America.

“By tracking the migra­tion of notable indi­vid­uals for over two mil­lennia, we could for the first time explore the boom and bust of the cul­tural cen­ters of the world,” said Albert-​​László Barabási, Robert Gray Dodge Pro­fessor of Net­work Sci­ence and director of Northeastern’s Center for Com­plex Net­work Research. “The observed rapid changes offer a fas­ci­nating view of the tran­sience of intel­lec­tual supremacy.”

For example, Rome was a major cul­tural hub until the late 18th cen­tury, at which point Paris took over the reins. Around the 16th century, in Europe at least, two distinct approaches could be identified:  countries with intellectual ‘monster hubs’ that attract a sub­stan­tial and con­stant flow of intel­lec­tuals (i.e.: Paris, France) and a more dispersed regime with cities within a fed­eral region (i.e.: Ger­many) com­peting with each other for their share of intel­lec­tuals, clearly outnumbered by the monster hubs but well above average, compensating in numbers.

Where culture goes to die

The dawn of the XXth century saw New York not only a bustling cultural center where many intellectuals would flock, but also a fantastic breeding ground where many notable figures of the time were born. Addi­tion­ally, loca­tions like Hol­ly­wood, the Alps, and the French Riv­iera, which have not pro­duced a large number of notable fig­ures, have become, at dif­ferent points in his­tory, major des­ti­na­tions for intel­lec­tuals, per­haps ini­tially emerging for rea­sons such as the location’s beauty or climate.

“We’re starting out to do some­thing which is called cul­tural sci­ence where we’re in a very sim­ilar tra­jec­tory as sys­tems biology for example,” said Schich, now an asso­ciate pro­fessor in arts and tech­nology at the Uni­ver­sity of Texas at Dallas. “As data sets about birth and death loca­tions grow, the approach will be able to reveal an even more com­plete pic­ture of his­tory. In the next five to 10 years, we’ll have con­sid­er­ably larger amounts of data and then we can do more and better, address more questions.”

Possibly the most interesting tidbit from the study is the fact that over the past eight centuries, the migration distance people have undertaken has not increased considerably, despite considerable transportation advancements (motor cars, trains) or extensive colonization. The findings seem to support Ernst Georg Ravenstein’s empirical findings based on the migration patterns he studied in the XIX century: most migrants do not go very far, those who do aim for big cities, urban centres grow from immigration far more than procreation, and so on.

The findings were reported in the journal Science. Below you can watch a beautiful time lapse video of how culture migrated in history. 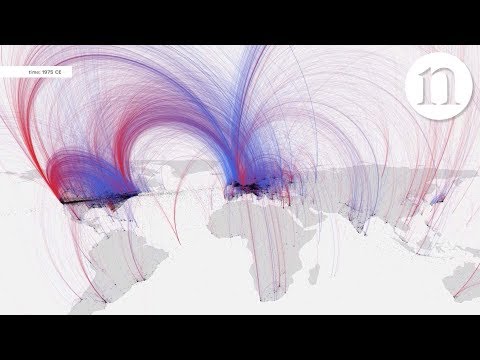