Eye-popping NASA video shows how CO2 circulates through the air

by Mihai Andrei
in Science
Reading Time: 3 mins read
A A

We know we’re emitting a load of CO2 into the atmosphere but we don’t really know how it circulates. Now, a new supercomputer model simulates how the greenhouse gas roams the atmosphere. 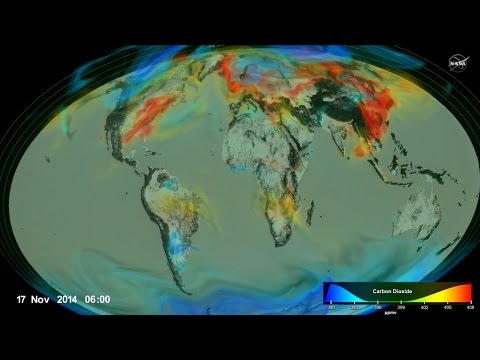 More than a pretty picture

Carbon dioxide plays a vital role in our planet’s shifting climate, acting as the main driver of man-made climate change. Rising concentrations of the gas, primarily owed to the burning of fossil fuels for energy, have caused Earth’s climate to get hotter and hotter. Scientists are well aware of this and have monitored the gas for decades – they’re interested not only in how much we emit but also in what it happens with it once it gets emitted.

The current (broad) understanding is that about half of it stays in the atmosphere, about 25% is absorbed by vegetation, and 25% is absorbed by the oceans. But that’s just the very broad picture. We don’t know for instance which ecosystems attract how much CO2, what happens to the CO2 in the oceans, and most importantly, how much CO2 can go into the ocean. Will it continue to sink there indefinitely or is there a compensation point after which the gas no longer gets absorbed but rather sticks into the atmosphere? Those are all significant questions, and complex visualizations such as this one can help us answer them.

Lesley Ott, a carbon cycle scientist at NASA Goddard and a member of the OCO-2 science team studies the so-called carbon flux — the change of CO2 between the atmosphere, the land, and the ocean.

“We can’t measure the flux directly at high resolution across the entire globe,” she said. “We are trying to build the tools needed to provide an accurate picture of what’s happening in the atmosphere and translating that to an accurate picture of what’s going on with the flux. There’s still a long way to go, but this is a really important and necessary step in that chain of discoveries about carbon dioxide.”

This 3-D visualization reveals the complex patterns of circulation in startling detail. It was generated by the Global Modeling and Assimilation Office at NASA’s Goddard Space Flight Center in Greenbelt, Maryland, using data from the agency’s Orbiting Carbon Observatory-2 (OCO-2) satellite at NASA’s Jet Propulsion Laboratory in Pasadena, California. OCO-2 was launched in 2014 and it represents NASA’s first satellite designed specifically to measure atmospheric carbon dioxide at a regional scale.

“Since September of 2014, OCO-2 has been returning almost 100,000 carbon dioxide estimates over the globe each day,” said David Crisp, OCO-2 science team leader. “Modeling tools like those being developed by our colleagues in the Global Modeling and Assimilation Office are critical for analyzing and interpreting this high resolution dataset.”

The visualization is the most advanced of its type, and as all complex models these days, it owes a lot to the development of supercomputers. The massive calculations involved in generating global carbon cycles are mind-bending, and this effort showcases how much modern science owes to computers.