by Tibi Puiu
in Chemistry, Green Living, News, Renewable Energy
Reading Time: 3 mins read
A A
Share on FacebookShare on TwitterSubmit to Reddit 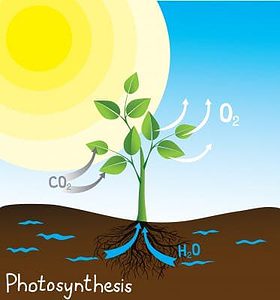 While scientists have been studying and incrementally increasing solar cell efficiency, we’ve yet to reach nature’s magnitude of solar energy conversion through photosynthesis. Artificial photosynthesis is a goal in alternative energy research, yet the process is extremely difficult to mimic since, in nature, the process involves numerous stages and transformation of matter and energy. Purdue University physicists used spinach and applied novel techniques to understand what happens during one of the photosynthesis stages.

Photosynthesis is the process plants employ to convert carbon dioxide using energy from the sun into chemical energy in the form of hydrogen-carrying carbohydrates and oxygen. This process is achieved with massive energy conversion efficiency, which is why an artificial photosynthesis system is so desirable. To recreate the photosynthesis that plants have perfected, such an artificial system needs to perform two key roles: harvest energy and split water molecules. Plants accomplish these tasks using chlorophyll, which captures sunlight, and a collection of proteins and enzymes that use that sunlight to break down H2O molecules into hydrogen, electrons and oxygen (protons). The electrons and hydrogen are then used to turn CO2 into carbohydrates, and the oxygen is expelled.

One step close to the power of photosynthesis

Splitting water isn’t that simple though – there are organic catalysts involved and multi-steps processes, and nature had the benefit of millions of years worth of evolution to tweak photosynthesis to the highest efficiency possible. Attempts so far at mimicking this process have been rather counterproductive. Oxidizing water is a four-electron process, but the catalysts used in artificial photosynthesis processes, like cobalt oxide, have been found to be ineffective in the later stages.  So what can we do? Well, one course of action would be to solve and understand each intermediate step and then fill in the puzzle.

Yulia Pushkar, a Purdue associate professor of physics, and her colleagues  extract a protein complex called Photosystem II from spinach they bought at the supermarket. After the protein was extracted, the researchers fired an ultra fast laser that basically acts like sunlight (the protein needs light to activate) and recorded the electron configuration of their molecules. Photosystem II is involved in the photosynthetic mechanism that splits water molecules into oxygen, protons and electrons.

Using the world’s most powerful laser,  the LCLS atthe  Department of Energy’s SLAC National Accelerator Laboratory, the researchers fired fast femtosecond (one-quadrillionth of a second) laser pulses which allowed them to record snapshots of the PSII crystals before they explode in the X-ray beam, a principle called ‘diffraction before destruction. X-rays are great if you want to see structural changes in a crystal, but you can’t see its electron configuration evolution in time.

When PSII splits water,  a portion of the protein complex, called the oxygen-evolving complex, cycles through five states in which four electrons are extracted from it. The international team recently revealed the structure of the first and third states at a resolution of 5 and 5.5 Angstroms using the techniques described above.

“The electronic configurations are used to confirm what stage of the process Photosystem II is in at a given time,” she said. “This information is kind of like a time stamp and without it the team wouldn’t have been able to put the structural changes in context.”

Findings appeared in the journal Nature.