Chemistry’s periodic table of elements can welcome two new entries: Livermorium and Flerovium, which were announced Thursday, on the first of December by the International Union of Pure and Applied Chemistry. According to procedure, they will undergo a five month public comment period after which the official paperwork will be done and they will be formally added to the table. 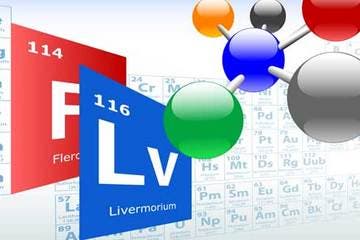 It seems this was a good year for chemical elements after three other elements recently took positions 110, 111 and 112. However, all of them are very large (for atoms) and extremely unstable, so from what we know of, they can only be created in a lab, and even there are incredibly unstable.

These new elements fit in the 114 and 116 elements; currently, elements 113, 115, 117 and 118 have already been obtained in Russia, but their creation hasn’t been confirmed by International Union. However, results seem extremely promising, especially as Livermorium and Flerovium were also produced at the same Russian lab. Their names might seem quite odd, but they owe their names to the Lawrence Livermore National Laboratory in California and Georgiy Flerov, the founder of the Russian Laboratory of Nuclear Reactions. The race for the next elements is still strong, and Moscovium seems an extremely likely candidate.

“Proposing these names for the elements honors not only the individual contributions of scientists from these laboratories to the fields of nuclear science, heavy-element research, and super-heavy-element research, but also the phenomenal cooperation and collaboration that has occurred between scientists at these two locations,” Bill Goldstein, associate director of Lawrence Livermore National Labs’ Physical and Life Sciences Directorate, said in a statement.