Graphene aline can be challenging to work with on its own, but composites are already functional.

by Tibi Puiu
in Chemistry, News
Reading Time: 3 mins read
A A

A while back, researchers at Rice University pioneered a novel manufacturing method that produced graphene with a laser. The resulting flaky foam of the atom-thick carbon, however, lacked real-life functionality because of its flimsy nature. Now, the research team has found a way to integrate new materials in a composite that offers more robust properties. The promising graphene composite could be used in electronics, smart clothing, and medicine.

The team, led by Rice chemist James Tour, first made laser-induced graphene (LIG) in 2014. At the time, they used a commercial laser to burn the surface of a thin sheet of polyimide (a plastic). The concentrated heat turned a narrow piece of the plastic into flakes of interconnected graphene.

Graphene is often called the “wonder material” because of its phenomenal properties. Graphene is 200 times stronger than steel, while at the same time being very thin and elastic. Graphene is also an excellent electrical and thermal conductor thanks to its crystal and band structures.

One big challenge that keeps the honeycomb lattice of carbon from becoming mainstream is manufacturing. In this respect, LIG is very promising because it produces graphene flakes in a one-step process, at greater volume and at less cost than traditional chemical vapor deposition.

“LIG is a great material, but it’s not mechanically robust,” Tour said in a statement. “You can bend it and flex it, but you can’t rub your hand across it. It’ll shear off. If you do what’s called a Scotch tape test on it, lots of it gets removed. But when you put it into a composite structure, it really toughens up.”

Since it was first developed, Rice University researchers have refined their technique to make LIG not only with plastic, but also with wood and even food. In their new research, the team combined LIG with other materials to produce composites with intriguing properties. In the video below you can see one such a composite in action with superhydrophobic (water-repelling) properties, which would make it suitable as a deicing coating. 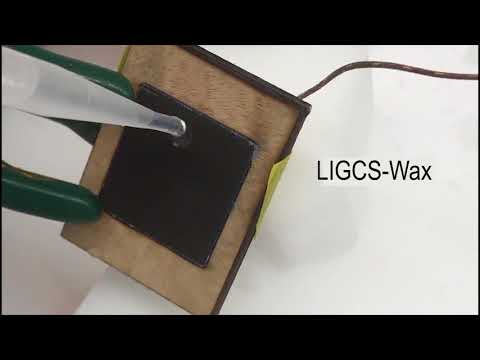 Softer composites of LIG can be used as active electronics in flexible clothing. What’s more, when a voltage is applied to the 20-micron-thick layer of LIG, bacteria present on the surface of the material are destroyed, making it a promising antibacterial application.

In order to produce the composites, the researchers simply poured or hot-pressed a thin layer of the additive over LIG attached to polyimide. After a while, the liquid hardens, and the polyimide can be stripped off for reuse, leaving connected graphene flakes behind.

“You just pour it in, and now you transfer all the beautiful aspects of LIG into a material that’s highly robust,” Tour said.

The findings were reported in the journal ACS Nano.