The story of how one of the most iconic American infrastructure works got built -- all in pictures.

When it was finally finished in 1936, the 60-story Hoover Dam was the highest dam in the world. That distinction now belongs to Jinping-I Dam in China. Eighty years later, however, Hoover Dam is not only still operational generating 3.6 TWh annually and a tourist attraction where millions flock every year, it’s also a remarkable engineering effort that serves as an inspiration for great infrastructure works.

This huge dam was built in only five years, from 1931 to 1936, with 5,251 people employed at peak construction. Hoover Dam’s story began much earlier, though. A famous engineer at the time from the Bureau of Reclamation named Arthur Powell Davis first outlined the vision for a high dam erected in Boulder Canyon, Colorado back in 1902. His indications and initial engineering report were put to good use when detailed plans for Hoover Dam began in 1921.

Herbert Hoover, the 31st president of the United States and the man the dam was named after, played a crucial role in turning Davis’ vision into reality. In 1921, at the time a secretary of commerce, Hoover became convinced that a dam is of the utmost importance in Boulder Canyon. Such infrastructure would provide much-needed flood control in the area protecting downstream farming communities that got battered each year when snow from the Rocky Mountains melted and spewed into the Colorado River.

The damn would also provide enough water to irrigate farming in the desert and supply southern Californian communities like Los Angeles with potable water. That’s, of course, in addition to the electricity it would generate. In 2015, Hoover Dam, which has a 2,000 megawatts of capacity, served the annual electrical needs of nearly 8 million people in Arizona, southern California, and southern Nevada.

Once Hoover became president in 1929, the Boulder Canyon dam became a national priority. In the same year, the president signed the Colorado River Compact into law, also known as the ‘Law of the River’. It defined the relationship between the upper basin states, where most of the river’s water supply originates, and the lower basin states, where most of the water demands were developing. Hoover would later claim this was “the most extensive action ever taken by a group of states under the provisions of the Constitution permitting compacts between states”.

Building Hoover Dam was a gargantuan task. Before construction of the dam itself could begin, the Colorado River had to be diverted. Four diversion tunnels were carved through canyon walls to divert river flow around the dam site. Then, the riverbed had to dredged of deep silt and sediments to expose the bedrock formation.

To stabilize Hoover Dam, its base required 230 gigantic blocks of concrete. Then, columns were linked together like a giant Lego set with alternating vertical and horizontal placements. By the time concrete pouring ceased on May 29, 1935, some 2,480,000 m3 of concrete were used, not counting the 850,000 m3 employed in the power plant and other works. Overall, enough concrete was poured to pave a two-lane highway between San Francisco and New York!

All of that concrete would have taken 100 years to cool and cure properly were it not for the intervention of the Hoover Dam engineers. Some 528 miles worth of one-inch steel pipes were embedded through the interconnecting concrete blocks through which ice cold water was circulated. The water was supplied by the construction site’s own ammonia refrigeration plant which at peak capacity could produce the equivalent of a giant 1,000-pound ice block every day.

Hoover Dam is an arch-gravity design which dissipates that pressure into the canyon walls equally on the Arizona and Nevada side. Water exerts as much as 45,000 pounds per square foot of pressure at the base of Hoover Dam but this immense crushing force is transferred to the canyon walls. 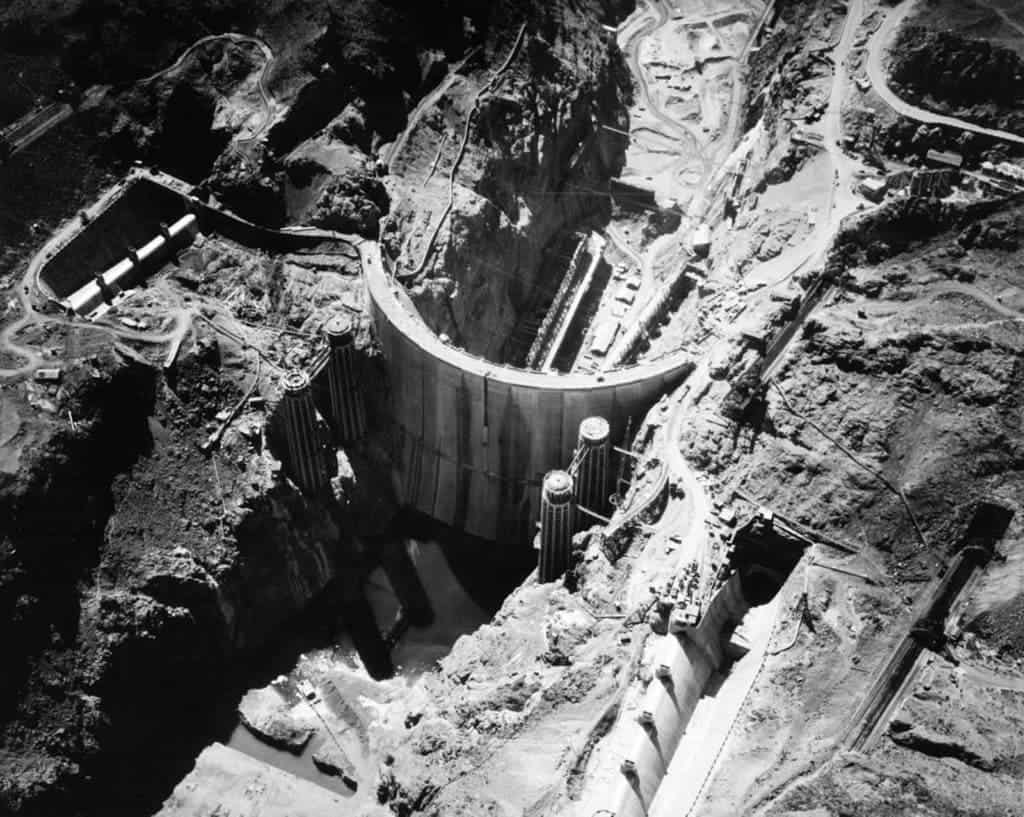 The architect of Hoover Dam was Gordon B. Kaufmann, known for his design of the Los Angeles Times Building. Kaufmann not only took structural design in consideration but also applied an elegant Art Deco style to the entire project.

A widely circulated urban myth says many dead bodies were buried inside the dam’s concrete. That’s certainly not true although way too many people died building Hoover Dam by today’s standards. Officially, there are 112 deaths associated with the construction of Hoover Dam, including three workers who committed suicide on site, and a visitor who died accidentally falling off the massively high structure.

The final block of concrete was poured and topped off at 726 feet above the canyon floor in 1935. On September 30, a crowd of 20,000 people watched President Franklin Roosevelt commemorate the magnificent structure’s completion. The dam was designated a National Historic Landmark in 1985 and one of America’s Seven Modern Civil Engineering Wonders in 1994. It receives some 7 million visitors annually, while Lake Mead, the world’s largest reservoir, hosts another 10 million as a popular recreation area.