As more Millennials are leaving religion in droves, or choosing not to identify with any faith, acceptance of evolution among the public strengthens.

by Tibi Puiu
in Biology, News
Reading Time: 5 mins read
A A
Share on FacebookShare on TwitterSubmit to Reddit

A comparison of peoples’ views in 34 countries found in 2006 that the United States ranked near the bottom when it comes to public acceptance of evolution. Only Turkey ranked lower. But the United States might not lag for too long behind other Western countries. 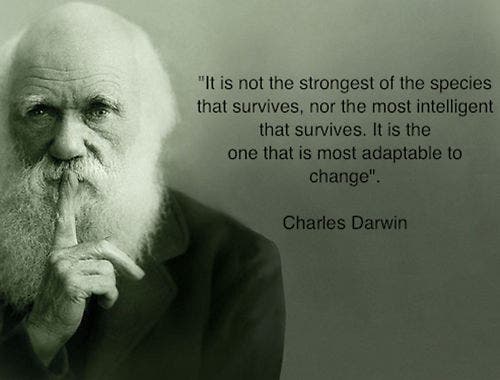 Pew Research Center reports 73 percent of American adults younger than 30 expressed some sort of belief in evolution, significantly more than 2009 when this figure sat at   61 percent in 2009. Those who expressed belief in secular evolution (seeing evolution as completely unrelated to a deity) jumped from 40 percent to a majority of 51 percent.

Last year, a Gallup poll strikingly found four in 10 Americans believe that God created humans in their present form 10,000 years ago, a view that has changed little over the past three decades.  Compare this to the results of a 2009 poll by Pew Research Center which found that “Nearly all scientists (97%) say humans and other living things have evolved over time – 87% say evolution is due to natural processes, such as natural selection. The dominant position among scientists – that living things have evolved due to natural processes – is shared by only about a third (32%) of the public.”

Indeed, the most recent Pew Research poll shows the more educated a person is on science, the likelier it is that he’ll reject creationism in favor of evolution. Of course this is not surprising, because if you know a think or two about biology, paleontology, geology even astronomy, the only theory that makes sense is evolution. It’s a fundamental idea, and one of the most disruptive thoughts ever. I can only agree with classing Charles Darwin’s On the Origin of Species as the most influential academic book ever written, as voted by the public.

But as Millennials become more influential and start raising their own families, most of the time in an non-religious setting, belief in creationism will steadily continue to falter. About 56 million people identify themselves as “nones” — meaning that they identify as atheist, agnostic, or nothing in particular — a huge leap from just 19 million since 2007.

Of course, evolution has been accepted by most religions. In fact, some religious leaders have found elegant ways to incorporate it in religious dogma.  In 2014, Pope Francis set off a firestorm when he said the Big Bang and evolution were real.

“When we read about Creation in Genesis, we run the risk of imagining God was a magician, with a magic wand able to do everything. But that is not so,” Francis said at a meeting of the Pontifical Academy of Sciences,according to Reuters. “He created human beings and let them develop according to the internal laws that he gave to each one so they would reach their fulfillment.”

The pope added at one point: “Evolution in nature is not inconsistent with the notion of creation, because evolution requires the creation of beings that evolve.”

The Pope is a perfect example of ‘theistic evolutionist’, although other in his antourage might not be as open minded. On closer inspection such religious believers either reject full-blown “Darwinian” (i.e., unguided) evolution or they jettison traditional theism in order to uphold a consistent Darwinism.

“If we take the results of modem science seriously, it is difficult to believe that God is omnipotent and omniscient in the sense of the scholastic philosophers… Let us suppose that God possessed the theory of everything, knew all the laws of physics, all the fundamental forces. Even then could God know with certainty that human life would come to be? If we truly accept the scientific view that, in addition to necessary processes and the immense opportunities offered by the universe, there are also chance processes, then it would appear that not even God could know the outcome with certainty,” said Catholic priest George Coyne, the former director of the Vatican Observatory.

Unfortunately, other religious leaders and followers don’t reconcile as well with evolution running counter their dogma and way of life. In the U.S. the intelligent design–promoting Discovery Institute in Seattle has published biology textbooks questioning evolution and has promoted the 2008 film Expelled: No Intelligence Allowed to make the case that anti-Darwinist scientists are persecuted. This is not only silly, but downright propaganda. How can we forget that famous slip by Sarah Palin who said in 2008 that she believes that creationism should be taught alongside evolution in schools. She might be on to something since one  in eight high school biology teachers already treat creationism as a valid alternative, according to a Pennsylvania State University poll. US courts have repeatedly decreed that creationism and intelligent design are religion, not science, and have no place in school science classrooms. But no matter what courts and school boards decree, it is up to teachers to put the curriculum into practice.  In Tennessee and Louisiana, state law allows public schools to teach creationism. And in Texas, one network of charter schools — which currently has about 170,000 students enrolled — is actively teaching creationism in class.

“The biggest problem we’ve had is teachers who self-censor,” adds Eugenie Scott, co-founder of the NCSE and a former science teacher who has been part of the evolution versus creationism debate for more than two decades. “They’re responding to this very pervasive ‘There’s something wrong with evolution’ mentality. There are too many teachers around the country who anticipate that they’re going to get pushback if they teach the e-word, so they skip that section of the textbook. ‘Sorry kids, we don’t have time to cover everything—let’s go on to photosynthesis.’ ”

It’s good that more young Americans are supporting evolution, and it’s ever better that theists manage to fit evolution in their dogma. What’s unfortunate is that there are parties and persons that see this as a battle, some more so than others (yes, theists).