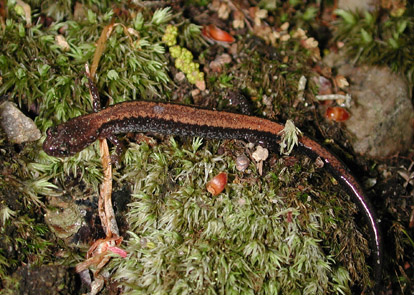 Remember when we were kids and everyone picked on the ones who looked peculiar in a way or another starting from their hair color and ending with their height? Well, whether you were a “victim” or a “predator” find out that there is a reason why some individuals of a species look at least a bit different. It simply makes predators look away.

As the researchers from the University of Tennessee discovered, birds are most likely to attack those salamanders that look like the majority. The scientists wanted to see how Blue Jays would react facing the prevalence of a dorsal stripe among a group of salamanders.

The discovery is quite intriguing as usually throughout a species’ evolution those traits that make an individual stronger, more able to find food or escape predators are the ones to “survive” while the other ones disappear. As an example those giraffes who had a longer neck were more likely to breed so that in the end the entire species possesses this trait.

However, in this case it seems that being different might keep predators away, thus allowing the individual to survive and breed. The regular back pattern of the salamanders makes them similar to the environment they live in, which makes them hard to see. The striped salamanders released by the researchers in the first day outnumbered the unstriped by nine to one or the other way around. On test days the numbers were evened out but the Blue Jays proved to prefer to attack those models that had seen most before that day. The birds were used to concentrate in order to spot a salamander on the forest floor, this constant effort making them not even notice the ones who were not striped.

So, it seems that the experiment proves a new theory: predators seem to avoid those individuals who look peculiar. Too bad it does not work for bullies too!