Watch: The Inside of a Huge Wasp Colony

by Henry Conrad
in Biology, Offbeat, Videos
A A

Some wasps decided to build their colony next to the window of Youtube user Vang Tsal. Naturally, he was spooked – wasps are mean, and can be quite difficult to deal with. But instead of panicking and attempting to destroy the hive, he filmed it – and the results are spectacular: 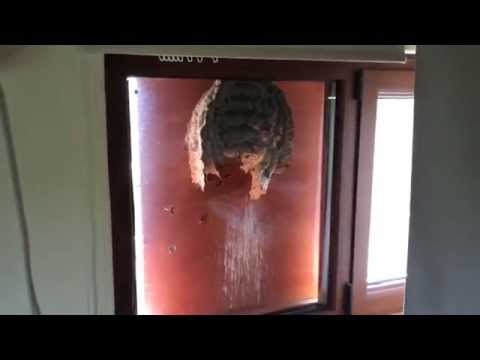 The colony now offers a perfect perspective of wasp life – thankfully, from the safety of the inside of his house.

“Big wasps are building a huge nest in my window,” Tsal writes on his YouTube page. “I can observe its construction in real-time cross-section!”

Pretty incredible, huh? This actually reminds me of a an old episode of BBC’s The One Show, in which host George McGavin, entirely covered by protective gear, enters a wasp colony to document it with a tiny camera.

“What would be really great would be if I could open this up and examine the internal structure,” says McGavin, his voice overlaid atop what is nevertheless some really great footage of the nest’s crowded antechambers. “But there’s so many wasps in there I think it would be a bit dangerous.”

Tsal’s colony cross section offers the best of both worlds! Oh, and he promises that he wouldn’t destroy the colony anytime soon, documenting it as it continues to develop on his Youtube channel.