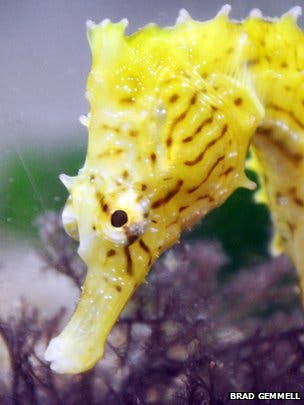 Seahorses may appear cute and slow, but they are in fact ferocious and ingenious predators, according to a new study. The creatures are notoriously slow swimmers, but they have a secret weapon which gives them an edge in their environment: their snouts.

The rather weird looking anatomical feature which makes them so distinctive and cute plays a key role – it is shaped to create very few ripples in the water, effectively cloaking them as they creep up and pounce on tiny crustaceans. To their victims, seahorses appear like silent, efficient monsters, stalking you and creeping up whenever you’re not paying attention.

“The seahorse is one the slowest swimming fish we know of, but it’s able to capture prey that swim at incredible speeds,” said Brad Gemmell, author of the study in Nature Communications.

They usually prey on copepods – small crustaceans found in the sea and nearly every freshwater habitat. When copepods detect waves from predators, they sprint away at incredible speeds, up to 500 body lengths per second (the equivalent of an average man swimming at 3.000 km/h). But seahorses found a way to trick them.

“Seahorses can overcome one of the most talented escape artists in the aquatic world,” said Dr Gemmell. “In calm conditions, they catch their intended prey 90% of the time. That’s extremely high, and we wanted to know why.”

This makes them some of the best predators on Earth – lions only succeed in about 25% of their hunts while sharks are under 60%. It’s estimated that the most effective predator is the dragonfly, successful in 95% of all attempts. But the seahorse is right there in the front.

When seahorses hunt, their throats arch like springs, allowing them to rapidly rotate their heads and suck their prey in. But this suction only works at small distances (about 1 millimeter), so it’s essential for them to sneak up on the prey, since they’re awful swimmers. But how they managed this was still a mystery, until now.

Dr Gemmell and his colleagues studied the dwarf seahorse, Hippocampus zosterae, filming the movement of the water in 3D using holography – a technique where a microscope is fitted with a laser and a high-speed digital camera. They found that the snout is shaped so that it minimizes disturbance of water in front of its mouth before it strikes.

“It’s like an arms race between predator and prey, and the seahorse has developed a good method for getting close enough so that their striking distance is very short,” said Dr Gemmell. “People don’t often think of seahorses as amazing predators, but they really are.”