Sea turtles use magnetic fields to navigate the world

Turtles have a magnetic-based, extremely accurate GPS which they use to navigate the oceans.

Turtles seem to “imprint” the magnetic field of the beach they were born, returning to it decades later to hatch the new generation. However, researchers report, this strategy sometimes tricks turtles into navigating to a beach that has a similar magnetic field to the one they were looking for. 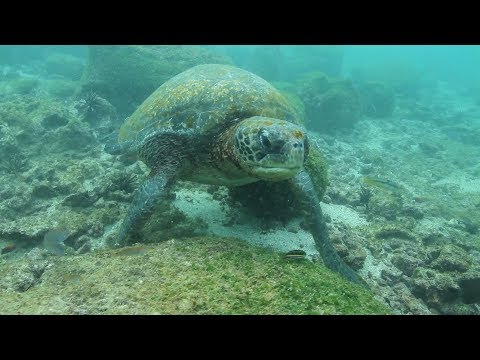 Loggerhead sea turtles are a strange bunch. Facing an extremely dangerous beach run to the sea, and then daring the ocean on their own, they still somehow remember their birthplace, returning to it years and years later to lay their own eggs.

“Loggerhead sea turtles are fascinating creatures that begin their lives by migrating alone across the Atlantic Ocean and back. Eventually they return to nest on the beach where they hatched – or else, as it turns out, on a beach with a very similar magnetic field,” said Kenneth Lohmann, professor of biology in the College of Arts and Sciences at University of North Carolina (UNC).

UNC biologists Kenneth Lohmann and Roger Brothers already had some proof that adult loggerhead sea turtles use magnetic fields to find their way back to the beach where they themselves hatched. In a new study, the two scientists report that magnetic fields are the strongest predictor of genetic similarity among nesting loggerhead sea turtles, which adds new evidence to their magnetic imprint theory.

Traditionally, scientists have thought that animals that live close to each other are more likely to be similar genetically. This might also be the case because animals living in similar environments tend to develop similar adaptations. But for the loggerheads, proximity isn’t a predictor of genetical similarity — bug magnetic field is. In other words, turtles which lay eggs on a particular beach are more similar to other turtles which lay eggs on a beach with a similar magnetic field — even if that beach is much farther away, like on the opposite coast of Florida. Actually, researchers report, turtles sometimes mistake their beach for a different beach with a similar magnetic field.

Turtles aren’t the only ones to use magnetic fields to navigate across great distances, and researchers say this new finding could be extremely important for the conservation of these species.

“This is an important new insight into how sea turtles navigate during their long-distance migrations. It might have important applications for the conservation of sea turtles, as well as other migratory animals such as salmon, sharks and certain birds.”