Salmon uses magnetic field to guide itself back home

by Tibi Puiu
in Animals, Biology
Reading Time: 4 mins read
A A
Share on FacebookShare on TwitterSubmit to Reddit

For years scientists have been studying the salmon migration path, which is one of the most fascinating, yet dangerous. Once it’s born in its freshwater breeding location, the salmon heads for salt water in the ocean, before it returns to its exact  freshwater stream of birth in order to restart the process – a journey that lasts for years and carries the salmon thousands of miles. How they manage to navigate so precisely is still a subject for debate, but recently scientists at Oregon State University have proven that a very important signal is Earth’s magnetic field.

The idea that salmon use Earth’s magnetic field to navigate to their original freshwater streams isn’t new, by far, it has actually been regarded as acceptable by the community for years. However, this is the first time the theory has been proven.

For their study, the researchers chose to look at the sockeye salmon, which is native to the northern Pacific Ocean and has the most grueling journey out of all salmon species. Data collected by fisheries for the past 56 years was used in order to find where the largest proportions of salmons could be found in which areas of the streams. Luckily a natural experiment had a deciding factor. Near the mouth of British Columbia’s Fraser River is 460-kilometer-long Vancouver Island, which lies right in between the sockeye salmon migration path back home. 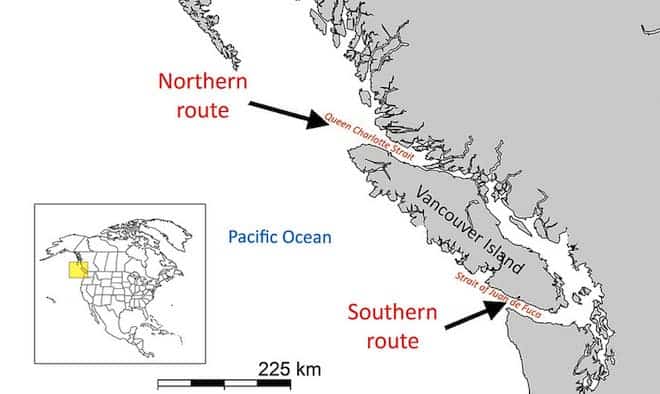 Once the salmon reach Vancouver Island it is presented with two choices – either swim around it north or south. After studying the  federal fishery data, the researchers found the most salmon chose to swim by the route where the magnetic field strength was more similar to that of the river mouth when they’d left, two years before.

According to Putman, other marine animals in migration, like sea turtles or seals and whales, may be picking up the same magnetic cues as the salmon. “It seems unlikely that salmon are the only ones who’ve come up with this really good idea for finding your way home – it likely evolved in multiple lineages,” he said.

“In general, we know much less about how salmon complete the ocean part of their migration compared to fresh water,” said quantitative ecologist Chloe Bracis, a graduate student at the University of Washington who also studies geomagnetic salmon navigation. “The authors cleverly take advantage of spatial differences in a salmon migration route to provide the first solid evidence that salmon use geomagnetic cues to direct their oceanic migration.”

While the study clearly proves magnetic cues are used by salmon when navigating through fresh streams, it still doesn’t prove how it’s able to navigate through the endlessness of the open ocean. Other studies, including the present one at hand, also describe how the salmon uses water surface temperature, as well as chemical cues to guide themselves back to their breeding grounds. Still, these might just be a few tools in the fish’s navigation gear.

“They might use … a sun compass or other cues,” Bracis said. “Geomagnetic cues could guide them to the vicinity of the river, then they would need to switch to other local cues to navigate the rest of the way to the river mouth or through the estuary.”

Findings were reported in a paper published in the journal Current Biology.