Panda poo shows they shouldn’t munch on bamboo so much

Giant pandas love to feast on bamboo - it's their favorite food, and they easily make quick work of it, using their powerful jaws to peel the plant's tough bark and get to its tender core. But even though the pandas love it, their stomachs don't - a new study has revealed that the panda's stomach is not adapted to a completely herbivorous diet, and still craves for an omnivorous meal, like other bears.

Giant pandas love to feast on bamboo – it’s their favorite food, and they usually make quick work of it, using their powerful jaws to peel the plant’s tough bark and get to the tender core. But even though the pandas love it, their stomachs don’t – a new study has revealed that the panda’s stomach is not adapted to a completely herbivorous diet, and still craves for an omnivorous meal, like other bears. 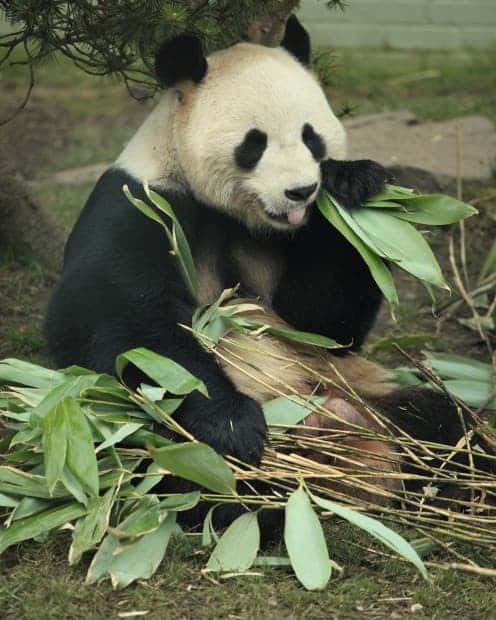 With them being so fluffy and lazy, it’s easy to forget that panda bears are… well, bears. But bears eat both plants and other animals – they have what is called an omnivorous diet – while pandas only eat plants (mostly bamboo). However, the giant panda still has the digestive system of a carnivore, as well as carnivore-specific genes, and thus derives little energy and little protein from consumption of bamboo – which is why it can spend up to 14 hours a day eating bamboo.

A team of researchers in China wanted to see just how well the panda’s stomach gets along with its food, so they took 121 fecal samples from 45 giant pandas — 24 adults, 16 juveniles and five cubs. They then compared the results with those from a previous study on wild pandas. Both studies showed the fact that pandas don’t have plant-degrading in bacteria, and draw very little energy from bamboo.

“This result is unexpected and quite interesting, because it implies the giant panda’s gut microbiota may not have well adapted to its unique diet, and places pandas at an evolutionary dilemma,” said Xiaoyan Pang, a co-author of the study in a press release.

It seems like evolution only went half way – the pandas developed powerful jaws and teeth specifically for eating plants, but they don’t have the digestive system to work with. So the only solution that was left for them was to have bacteria that help it break down the bamboo. The authors write:

“The giant panda appears to have no alternative but to rely on symbiotic gut microbes to adapt to its highly fibrous diet.”

So that’s what the researchers were expecting to find, except they didn’t. Furthermore, the bacterial diversity in the panda’s stomachs was extremely low, compared to other mammals. A high gut bacteria diversity is associated with resilience and adaptation capability, so this means that the panda is highly vulnerable and can’t really adapt to new environments and new diets.

But the biggest surprise was the fact that the dominating bacteria population was represented by Escherichia/Shigella and Streptococcus – something you’d expect to see in meat eaters, not vegetarians. Ruminococcaceae and Bacteroidetes bacteria, generally associated with degrading fiber, were missing.

So why is it then that pandas eat plants? Why did their transformation from omnivorous to plant-eating bear stop half way?

We still don’t know yet, but one thing’s for sure: pandas are passing through an evolutionary stage where they are extremely vulnerable. They can’t adapt to new environment, they can’t properly digest the food they eat, and so they have to spend most of their time eating and not spend much energy. In other words, pandas might just be eating their way to extinction.