by Mihai Andrei
in Biology, Other
Reading Time: 2 mins read
A A
Share on FacebookShare on TwitterSubmit to Reddit 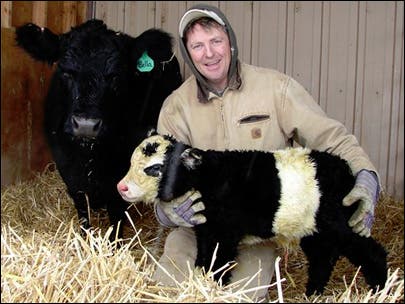 This New Year brought more joy than usual for a Colorado family, as Chris and Pam Jessen were thrilled by the birth of an extremely rare type of cow in their farm: the panda cow. The panda cow is an uncommon cross breed that was worked on for 44 years by Richard Gradwohl, a Covington, Wash., farmer, using eight different breeds of miniatuare cows and mixing them with a lot of patience and ambition. Thus, thanks to his work, Ben was able to come to the world in Chris’ farm, that also houses other miniature cattle as well as a miniature kangaroo.

Ben is one of just 25 panda cows in the whole world, but one can only wonder what can these animals do, aside from being cute and cuddly ? Well, the answer is ‘nothing’; but they are really cute and cuddly.

“Miniatures range from about 44 inches tall on their tail side, on their hocks, but he can get up to 1000 pounds though — so a pretty good-sized animal,” Chris Jessen told “Good Morning America.”

Panda cows are estimated at 25.000$ and the Jensens say they eventually plan on selling Ben, who had a really funny episode on GMA.

“Probably the most amazing thing aside from the fact that he’s rar is that he’s on the couch right now. Suddenly my lap is starting to get very warm! I don’t think he’s gonna be on the couch after this again!” Chris Jessen said.