by Alexandru Micu
in Biology, News, Research, Science
A A

Studying microorganisms is hard work — and sometimes it can get a bit dull. To stave off the tedium of a day’s work in the lab, researchers from the Univeristy College of Southeast Norway now rely on watching games of Pac-Man, with a twist: the team re-created the iconic maze in tiny proportions to better understand the predator and prey behaviours of protozoans and rotifers. 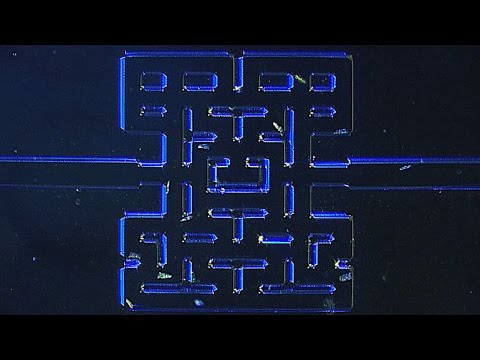 Led by Professor Erik Andrew Johannessen of the Institute of Micro and Nano System Technology, a team of Norwegian scientists created the “Mikroskopisk Pacman” project, a nano-structure maze of under one millimeter in diameter. The role of Pac-Man is assumed by protozoans euglena and ciliate, with pseudocoelomate (in this case rotifers) acting as the Ghosts. While undeniably awesome, the project wasn’t put together for its fun factor alone, the team reports.

The maze forms a 3D environment that allows microorganisms to interact more naturally than the artificial medium of a 2D petri dish. The tiny canals inside the maze also resemble the structures these creatures navigate to in the wild.

To make it more accessible to the public, film director Adam Bartley lyslagt was brought in to create the Pac-Man themed map and film the “gameplay” between euglena and rotifers. Using micro scenography, Iyslagt captured the video above. The little creatures can be seen darting around for dear life — or a tasty meal.

The team behind the project says that it not only helped with their research but also with relaying their findings in a way people can understand better and are more engaged with, raising awareness of science. I’d say they hit the nail on the head here — I’m definitely engaged and aware.

We can also look forward to a sequel. The team said they’re focusing on creating more Pac-Man style levels in future projects, as well experiments based on other games.