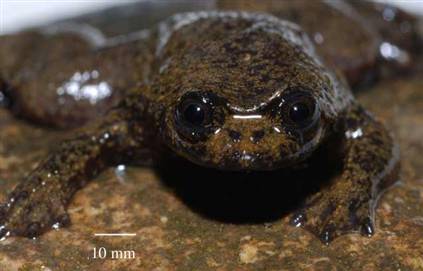 The first lungless frog has been discovered lurking in the jungles of Borneo. This amphibian is totally enigmatic, at least until now, for scientists who haven’t been able to figure out how come it gets all its oxygen through its skin.

Scientists first discovered these frogs about 30 years ago but because they’re so rare, just one other specimen had been collected since then and neither had been dissected. The amphibians are no longer than 2 inches long and they live in cold fast waters, in Kalimantan, Borneo.

“No one thought to open them up — there was no real reason to believe that they could be lungless,” said researcher David Bickford, an evolutionary biologist at the National University of Singapore. “Because these specimens were so rare, they had never been dissected. If you have just one specimen in your museum, you don’t want to rip it open!”

“There are so many difficulties in field work, and yet it remains my biggest joy,” Bickford added. “Having the undeniable privilege of going out to these remote sites, seeing some of the last and greatest treasures that exist in the wild, and then getting to study them — well, every day I feel lucky.”

As researchers were doing their job, they were really amazed to see that the frog has actually no lungs. Djoko Iskandar, an Indonesian zoologist, first described the Bornean Flat-headed Frog, and even he had no idea the frog was lungless until he was in the field with David Bickford’s expedition.

“At first I did not believe that the frogs had no lungs, but then, we just kept on seeing the evidence pile up. I was flabbergasted,” Bickford said.

An interesting fact is that the frog’s internal organs take up much of the space which would have been occupied by the lungs, and they are much more flatter than usual frogs, which probably helps them absorb oxygen and avoid being swept away in fast streams.