Unique, hybrid creatures discovered off the coast of Costa Rica

by Mihai Andrei
in Animals, Biology

Symbiosis is an absolutely fantastic adaptation in itself, but this case of deep sea symbiosis takes it to a whole new level: basically, a hermit crab uses an anemone as shell; scientists discovered this in a rare place, where to different extreme environments meet. 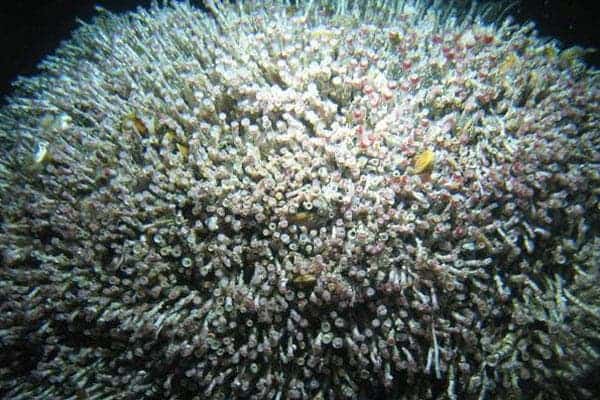 Researchers discovered a junction of two strange environments off the coast of Costa Rica: hydrothermal vents and cold methane seeps coexist side by side in a swath of the the deep sea, and guess what? Life found a way to adapt two both these environments, as biologists found a swarm of unknown species living there. They found this amazing habitat during a submersion with the Alvin submarine, during a dive in a spectacular tectonic setting, where an underwater mountain is moving under a tectonic plate.

“The most interesting aspects of this site are the presence of vent-like and seep-like features together, along with a vast cover of tubeworms over large areas and a wealth of new, undescribed species,” lead researcher Lisa Levin, of the Scripps Institution of Oceanography at the University of California San Diego, said in a statement.

Hydrothermal vents typically occur deep in the sea where rifts or just cracks in the seafloor through which volcanic substances rich in minerals spew in the water, creating a hydrothermal (hot water) environment, whereas cold seeps, as you can guess by the name, are far less intense and colder environments where hydrocarbon substances (such as methane) cover a large area.

The team coined a new term to describe the environment, calling it a “hydrothermal seep” – they published it in the March 7 issue of the journal Proceedings of the Royal Society B. Although they previously sent unmanned vehicles to the area before, it was only when they went on a manned mission that they found these remarkable creatures.

“It was not until human eyes saw shimmering water coming from beneath a large tubeworm bush that we really understood how special Jaco Scar is,” she said.

Recent expeditions have uncovered other spectacular environments in hydrothermal areas, like in Antarctica or in the Caribbean, where scientists found swarms of eyeless shrimp.