by Mihai Andrei
in Biology, News, Science
Reading Time: 4 mins read
A A
Share on FacebookShare on TwitterSubmit to Reddit

The most extensive DNA survey of the NYC subway has revealed that New Yorkers really like pizza and mozzarella, but also that drug-resistant microbes are widespread. They also found traces of the plague, anthrax, and learned that a tasmanian devil never took the subway in the city.

In a way, the human body is very similar to the subway – both harbor a rich biodiversity when it comes to microbes and other microscopic living creatures. The average human, for example, contains about 100 trillion microbial cells – 10 times more than it contains human cells. Even in the bloodstream, about a third of all cells are microbial. We may think ourselves as being human, but in a way, we are like a petri dish, tightly connected to the microbes that live, breathe, feed and reproduce on and inside our bodies; we couldn’t live without them.

“A city is like an organism,” said IBM Corp. computational biologist Robert Prill, who is among those at the company investigating ways to better collect and analyze these immense new public-health genome databases. “It has a circulating system consisting of the movement of people.” 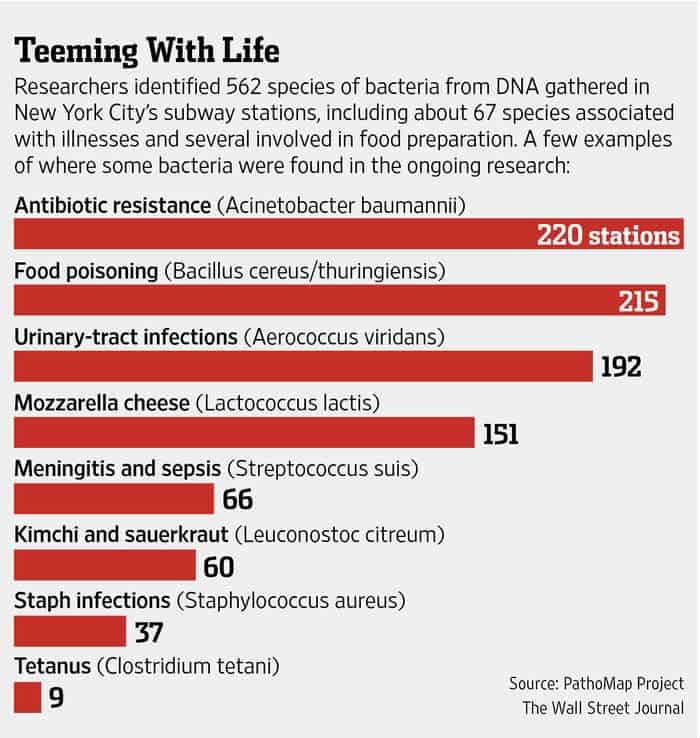 Also, as we move, we leave behind a trace – we basically shed our skin, dropping about 1.5 million skin cells every hour. If you look really carefully, you could find plenty of human skin cells, as well as the microbial cells that come along with them. This is what this survey aimed to do: see what microbial populations inhabit the subway, in order to better understand how they behave and develop in urban environments. These areas are very understanding, despite playing a key role in events such as disease outbreaks.

“We know next to nothing about the ecology of urban environments,” evolutionary biologist Jonathan Eisen at the University of California at Davis told the WSJ. “How will we know if there is something abnormal if we don’t know what normal is?”

This is where the PathoMap project steps in. PathoMap is a research project by Weill Cornell Medical College to study the microbiome and metagenome of the built environment of NYC. This huge project involved tests at 466 open stations in New York City, including on the kiosks, benches, turnstiles, garbage cans, and railings, over an 18-month period. Researchers dug their way through rats, vomit, and condoms to gather the DNA they needed for the survey.

By its end, researchers had over 10 billion fragments of biochemical code, which they then fed into a supercomputer armed with the extensive genetic databases of all known plants, animals, viral and bacterial life. With it, they were able to create an amazing map with 15,152 different types of life-forms this DNA belonged to were spread throughout the city. Here are just some of the results: 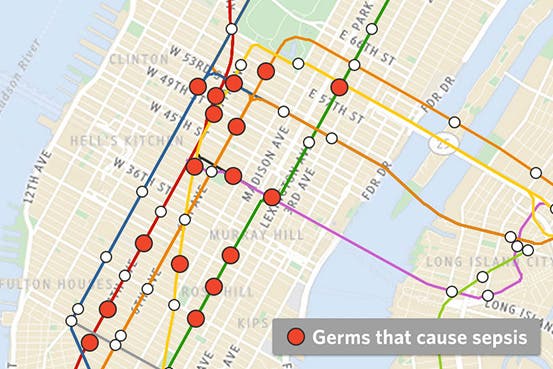 The results, which were published in the journal Cell Systems, paints a very interesting (and expected) picture of the microbial life and DNA traces from the NY subway. I really hope this kind of survey would be conducted in other areas as well, because as Eisen said, we need to know what are the “normal” microbial levels in heavily used areas such as subways. Different subways with different environmental conditions are likely to harbor different microbial populations.

“Unintentionally, architects and engineers are creating ecosystems without much thought at all as to whether they are healthy or harmful to humans,” said biologist Jessica Green, director of the University of Oregon’s Biology and The Built Environment Center. “Different urban conditions might promote the growth of different microbial ecosystems.”

It is a monumental task, but one which might prove to be very important in the future. As Science Alert brilliantly puts it, scientists are the real heroes.