Cockatoo figures out how to use tools – and manufacture them

by Mihai Andrei
in Animals, Biology
Reading Time: 2 mins read
A A
Share on FacebookShare on TwitterSubmit to Reddit

For researchers working with the bird, it came as a shock that Figaro was able to learn how to use a tool at all – let alone learn it by himself. While a hook-like twig might not be the most complex tool in the world, it still did the job, allowing the bird to grab the nut he was longing for. 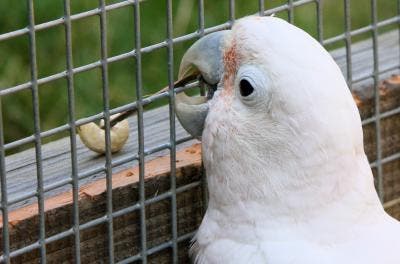 Even more interesting was the fact that after the successful attempt was concluded, Figaro experimented on different other occasions. Dr Alice Auersperg of the University of Vienna, who led the study explained:

After some unsuccessful attempts to reach it with his claw, he fetched a small stick and started fishing for his toy.

“Figaro made a new tool for every nut we placed there and each time the bird was successful in obtaining it”, reported the cognitive biologist.

This species of cockatoos are highly explorative and good problem solvers compared to other, regular cockatoos, but this was thought to be quite above their level.

“Until now Figaro is the only one in his species in which we could observe this behaviour so far”, Birgit Szabo says

Researchers put Figaro to the test again and again, and were again shocked: instead of searching for a tool, he started making his own.

“To investigate this further we later placed a nut where the pebble had been and started to film. To our astonishment he did not go on searching for a stick but started biting a large splinter out of the aviary beam. He cut it when it was just the appropriate size and shape to serve as a raking tool to obtain the nut.”

With the aid of his obtained tool, he got the nut every single time. The findings of the study have implications for our understanding of tool use in animals, and researchers hope to use this study to understand intelligence better in both animals and humans.

Research was published in Current Biology