Pianist plays the piano to old, injured elephants ontop of a Thai mountain 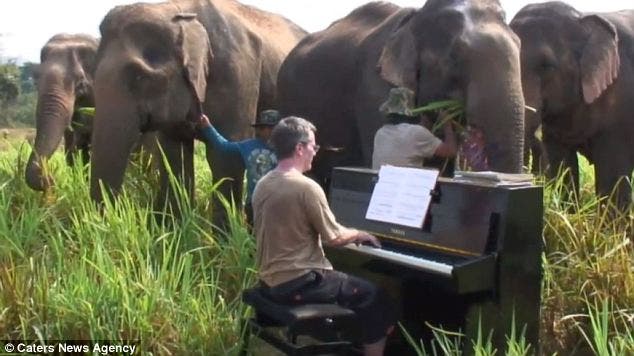 Paul Barton, a 50 year old pianist fulfilled his dream, as he sat behind his piano just a few metres away from the gentle giants. He transported his piano up a mountain in Thailand – so he could play Beethoven for old, injured, and blind elephants.

“It was a 50th birthday present to myself, my wife and I have been working with blind elephants for many years, and I thought it might be something they would enjoy to listen to. I sat down and thought, what do you play to an elephant? You only get a short time, so I started trawling through my books and then Slow movement 2 from Beethoven’s Pathitique Sonata just stuck. I had to drag the piano up a mountain, I have a really bad back, but I wanted to make the effort so I could feel like I had undergone a personal challenge.”

He didn’t do it just for himself, this is part of a fundraiser for elephants, which live in a sanctuary on the mountains of Kanchanaburi, north-east of Bangkok.

It’s currently estimated that there are only 60,000 Asian elephants in the wild, 10 times less than African elephants. You can watch a part of his interpretation here:

It makes a lot of sense to ask if the elephants can really appreciate this music; the short answer would almost likely be ‘yes’.

They don’t get a lot of credit for it, but elephants are actually really intelligent, and they often cooperate and show empathy. But it gets even better – elephants actually paint! They use their trunks to hold brushes create paintings which some have compared to the work of abstract expressionists. They show a similar affinity towards music.

It was noted by ancient Romans and Asian elephant handlers that elephants can distinguish melodies, but it wasn’t until 1957 that a biologist named Bernard Rensch studied an elephant’s ability to distinguish music. He then published his results in Scientific American, noting that his test elephant could distinguish 12 tones in the music scale and could remember simple melodies. Even though played on varying instruments and at different pitches, timbres and meters, she recognized the tones a year and a half later. These results have been constantly backed up by other studies.

It’s not clear if they like Beethoven though, but personally, I hope they do. This is one of the most heart warming ambitions I’ve ever seen (to play the piano in to old elephants), and I really hope they liked it.