Climate change is reversing the sex of bearded dragons, a first

Rising temperatures are fundamentally changing the way Australia's bearded lizards get their gender. Basically, the lizard's sex is not dependent on their genes as before, but on temperature. In time, the male chromosome could disappear, as more and more females are bred - the preferred sex. What this means is that if temperatures reach a critical level, then the lizards could become extinct due to lack of males. This has never happened before and it's as scary, as it is interesting.

Rising temperatures are fundamentally changing the way Australia’s bearded lizards get their gender. Basically, the lizard’s sex is not dependent on their genes as before, but on temperature. In time, the male chromosome could disappear, as more and more females are bred – the preferred sex. What this means is that if temperatures reach a critical level, then the lizards could become extinct due to lack of males. This has never happened before and it’s as scary, as it is interesting. 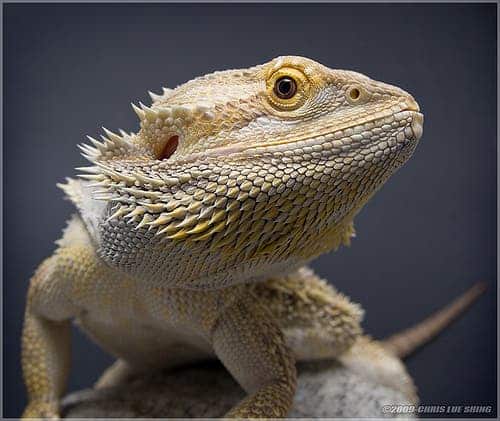 Humans, like other mammals and some insects, have their sex determined based on their chromosomes. If there are two of the same chromosomes (XX), then the individual is a female, while a different pair (XY) entails a male. This is called genetic sex determination (GSD). Reptiles work differently – their sex is determined by the temperature of the incubating eggs. This is  temperature sex determination (TSD).  For instance, when turtle eggs are cold males hatch, while females hatch at higher temperatures. In crocodiles, this pattern is reversed.

Bearded lizards use GSD. If there are two Z chromosomes, then the lizard is born a male, while ZW renders a female. But when Jennifer Marshall Graves raised the temperature of incubating lizard eggs a notch, the GSD was overridden  to TSD. Effectively, the sex of the lizards depended on temperature. When the eggs are incubated at 34 degrees Celsius, the body seems to ignore the usual genetic instructions, and even though a lizard has ZZ chromosomes, the egg will hatch as a female. Previously, everybody thought GSD and TSD are mutually exclusive. This was 2007.

Now, Clare Holleley from the University of Canberra along with colleagues captured 131 wild bearded dragons from eastern Australia and analyzed their genetic makeup. They found 11 ZZ females. These lizards are indistinguishable from ZY females: they can mate with males, can lay eggs and nurture the young. That sounds innocent enough – just a freak of nature. But in reality, it’s a lot more complicated. And dangerous.

Holleley also bred dragon lizards in a controlled lab setting. At 30 degrees Celsius, all the eggs hatched as males. At 36 Celsius, all were female. In between, there was a mix. What’s freaky is that  within just one single generation, the W chromosome had completely disappeared, and the dragons had switched completely to TSD.

“It is often thought that once a species veers down the path of chromosomal sex determination, there’s no going back,” explains Melissa Wilson-Sayres from Arizona State University.

“But this paper suggests that not only is it possible for a population jump out of the chromosomal sex determination rut, but that it actually occurs in the wild,” says Wilson-Sayres. “It’s  fantastic because it shows how much variation can exist right below our noses.”

“This makes me think of the statements I’ve seen about trans individuals not being “truly male” or “truly female”, because of their (presumed) set of sex chromosomes,” she adds. “This research tells us that even with chromosomal sex determination, exceptions occur all the time. In the bearded dragon, the exception may even be a benefit, as ZZ females lay more eggs that ZW females. This tells us that we’re thinking much too simply if we say with confidence that only XX is female and XY is male.”

The paper warns that if climate change intensives, sex reversal could increase among all dragon lizard populations, completely wiping out the W chromosome generation by generation. In the wild, of course, this reversal might be more gradual than in the lab. In time, males will become rarer until the species will become predominantly female. Extinction is just a step away. Then again, this is a reptile behaviour, and reptiles have survived through various temperature fluctuations. But then again, the rate of warming we’re experiencing today is quite steep. There might be no time to adapt. This raises questions about reptile sex determination adaptation at large.