Hubble shows 2 galaxies that are just losing it 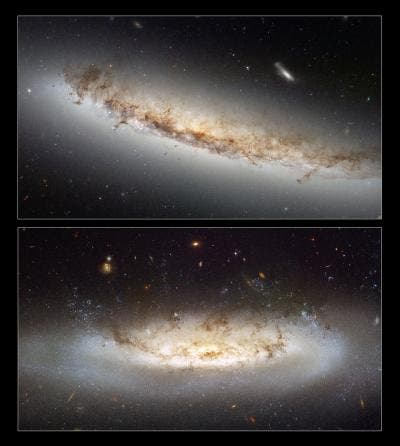 Ram pressure is the pressure exerted on a body when it passes through a fluid medium; this causes a drag force that is exerted on the body. The same pressure occurs when a galaxy (body) is moving through an intergalactic gas (fluid), and in this case, the ram pressure can sweep a significant part of the intergalactic gas from the galaxy. The spiral galaxy NGC 4522 is located a bit more than 60 light years away from our planet and it’s a great example of a spiral galaxy being stripped of its gas.

The galaxy is part of the Virgo galaxy cluster and it moves at over 10.000.000 km/h. This is just an image, but you can almost see the galaxy swirling, highlighting its dramatic state, as the halo-like gas is being forced out of it. This was caused by a number of newly formed star clusters.

The image also shows some more subtle effects of the ram pressure, such as the curved (convex) appearance of the disk and understanding it is really important because it helps researchers understand the mechanism that leads to the birth of galaxies better, and also provide important clues on how the rate of star formation is being ‘controlled’ by galaxies.