Dusty Winds and the Seeded Planets

by Mihai Andrei
in Astronomy, Space
Reading Time: 3 mins read
A A 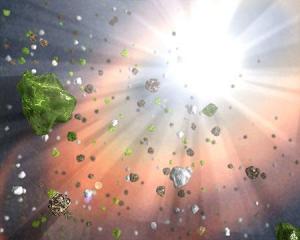 There is still some debate around how life appeared here on Earth and it is hard to find undeniable proof.

But the findings from NASA‘s Spitzer Space Telescope suggest that space dust — the same stuff that makes up living creatures and planets — was manufactured in large quantities in the winds of black holes that populated our early universe. Another problem this could bring an answer to is that of where did all the dust in the young universe originate.

“We were surprised to find what appears to be freshly made dust entrained in the winds that blow away from supermassive black holes,” said Ciska Markwick-Kemper of the University of Manchester, U.K. Markwick-Kemper is lead author of a new paper appearing in an upcoming issue of the Astrophysical Journal Letters. “This could explain where the dust came from that was needed to make the first generations of stars in the early universe.”.

Space dust is very important because it forms planets, stars, galaxies and even life as we know it – there’s a lot of truth to “we are all space dust”.

The dust which is close to us was piped out by dying stars that were once a lot like our sun. But what produced it when the universe was just a toddler is hard to say. Some scientists claim that short-lived, massive exploding stars, or supernovae, might be the source of this mysterious dust; others claim that a type of energetic, growing supermassive black hole, called a quasar, could be a contributing factor. A quasar (contraction of QUASi-stellAR radio source) is an extremely bright and distant active galactic nucleus. All observed spectra have shown considerable redshifts and they lie at great distances from us, the closest being 240 Mpc (780 million ly).

“Quasars are like the Cookie Monster,” said co-author Sarah Gallagher of the University of California at Los Angeles, who is currently a visiting astronomer at the University of Western Ontario, Canada. “They are messy eaters, and they can consume less matter than they spit out in the form of winds.”.

But nobody can say for sure that quasars are or are not what created enough dust to explain what is observed in the early universe. That goes for supernovae as well; so the debate is not cold. The team used Spitzer’s infrared spectrograph instrument to split apart infrared light from the quasar and look for signs of various minerals. They found a mix of the ingredients that make up glass, sand, marble and even rubies and sapphires. While the mineral constituting glass was expected, the minerals for sand, marble and rubies were a surprise. Those minerals are not typically detected floating around galaxies, suggesting they could have been freshly formed in the winds rushing away from the quasar.

“Supernovae might have been more important for creating dust in some environments, while quasars were more important in others,” said Markwick-Kemper. “For now, we are very excited to have identified the different species of dust in a quasar billions of light-years away.”. The study is of great importance.