Excavations conducted by the English Heritage have shown that Stonehenge has nothing to do with Sun worsipping and that the circle we see today was once complete. 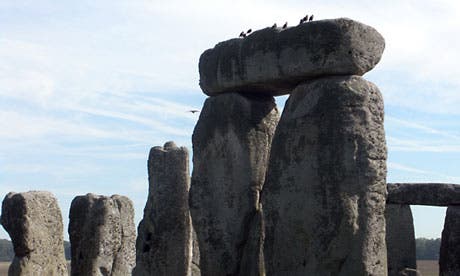 According to them, they discovered an important piece of the jigsaw puzzle in understanding Stonehenge – Englands greatest prehistoric site, and one of the most significant in the world. Excavations along the ancient route to the monument have shown that it was built along an ice age landform that happened to be on the solstice axis.

Beneath the tarmac (short for tarmacadam, or tar-penetration macadam) which paved the processional road, archaeologists found naturally occurring fissures that once lay between ridges against which prehistoric builders dug ditches to create the Avenue. It is believed that the ridges were created by Ice Age meltwater, and they just happen to point directly at the mid-winter sunset in one direction and the mid-summer sunrise in the other.

Professor Mike Parker Pearson, a leading expert on Stonehenge, said: “It’s hugely significant because it tells us a lot about why Stonehenge was located where it is and why they [prehistoric people] were so interested in the solstices. It’s not to do with worshipping the sun, some kind of calendar or astronomical observatory; it’s about how this place was special to prehistoric people. This natural landform happens to be on the solstice axis, which brings heaven and earth into one. So the reason that Stonehenge is all about the solstices, we think, is because they actually saw this in the land.”

The dig also uncovered three holes where missing stones would have stood on the outer sarsen circle – evidence that the Stonehenge circle was once complete. Asked why no one noticed these actual holes, Susan Greaney, an English Heritage historian, explained:

“The problem is we’ve not had a decent dry summer in many years. Stonehenge is always regularly watered, and the only reason these have shown up is because – for some reason this year – their hose was too short … So we’re very lucky.”