by Tibi Puiu
in Archaeology, Discoveries 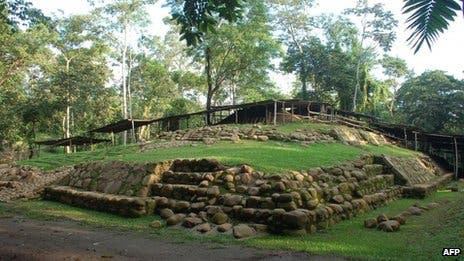 In yet another breakthrough archaeological find, the tomb of what’s considered by many the founder of the Mayan civilization has been found at the pre-Columbian archaeological site of Tak’alik Ab’aj in western Guatemala’s Retalhuleu region, about 45km from the border of Mexican state of Chiapas.

The tomb was built between 700  and 400 BC, according to carbon-dating and housed the body of  K’utz Chman, which in the Mayan language, Mam, means Grandfather Vulture. It’s around this time that the Olmec empire began to fade away making way for the growing Mayan civilization that went on to rule much of Central America from 250 to 800 AD.

“He was a big chief”,  said government archaeologist Miguel Orrego. “He bridged the gap between the Olmec and Mayan cultures in central America.”

Though no bones were found at the tomb, as they most likely disintegrated, the archaeologists were able to attest that this was the burial site of a highly important figure of Olmec society at the time based on the objects found there. Among these include hundreds of blue jade beads, which were found arranged in a set pattern suggesting that they were sewn on cloth or leather in which the king was buried. The center piece, however, which later gave Chman’s name as well, is a stunning beaded necklace with a pendant carved in the shape of a human figure having a vulture’s head.

“The richness of the artifacts tells us he was an important and powerful religious leader. He was very likely the person who began to make the changes in the system and transition into the Mayan world,” archeologist Christa Schieber added.

K’utz Chman’s grave is thought to be the oldest Mayan tomb found so far in Guatemala. The leader may have been the first to introduce elements which later became characteristic of the Mayan culture, such as the building of pyramids and the carving of sculptures depicting the royal families.