by Mihai Andrei
in Anthropology, Archaeology, News
Reading Time: 4 mins read
A A
Share on FacebookShare on TwitterSubmit to Reddit

The recent discovery of DNA of a 400,000-year-old human thigh bone could provide valuable insight into the evolution of humans; researchers explain this is easily the oldest human genetic material ever found.

When it comes to being a mountain, the Atapuerca Mountains in Spain don’t really have much going for them. It’s an ancient karstic region of Spain comprising mostly of limestone, looking really craggy and run down. But even though they may not impress geologists, the situation is very different with archaeologists. The area is home to a treasure trove of buried archaeological riches: fossils and tools belonging to the earliest known species of ancient humans. The most famous site is called Sima de los Huesos — “The Pit of Bones”, and this is where this femur also came from.

The remains of at least 28 people are there, and archaeologists have so far discovered over 5.500 bones. Now, working in the area, Matthias Meyer, a lead researcher at the Max Planck Institute for Evolutionary Anthropology, and a team of colleagues have recovered and analyzed the earliest known human DNA.

Everything about this discovery is special. First of all, archaeologists had to crawl for hundreds of metres through narrow cave tunnels; then, they had to go down, in the dark, while hanging on to a rope, Indiana Jones style. They believe that the bones (probably bodies at the time) were deposited in inaccessible areas. After they recovered the bones, they carefully drilled into them, obtained about two grams worth of bone, then isolated the DNA using a recently discovered method (in 2013) that employs silica to make the process more efficient. 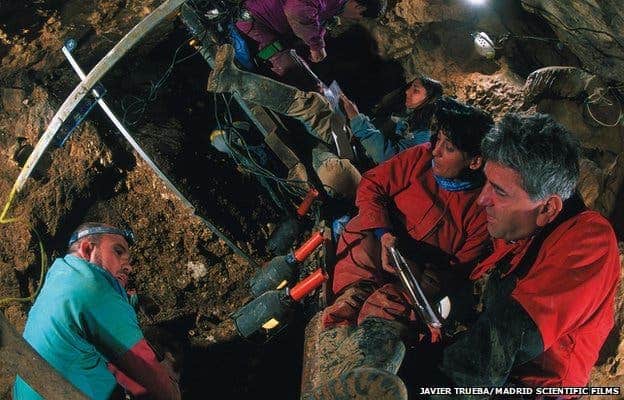 “Years ago, geneticists said they wouldn’t be able to find DNA that was older than 60,000 years old,” said co-author Jose Bermudez de Castro, from the National Research Centre for Human Evolution (CENIEH), a member of the team that excavated the fossils.

They focused on mitochondrial DNA (the cells’ energy factories), for two reasons:
– mitochondrial DNA contains way fewer genes than does nuclear DNA
– because mitochondrial DNA is passed on exclusively from mothers, there are usually no changes from parent to offspring – which makes it a very useful tool for tracking down ancestry. 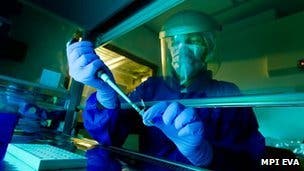 After sequencing 98% of the mitochondrial DNA genome, Meyer and his team estimated the age of the sample using the length of the DNA branch as a proxy. They estimated the age to be around 400.000 years, which would put it in the Middle Pleistocene and make it by far the oldest human DNA sample ever found. The previous record was a 100.000 year old Neanderthal sample.

The sample comes from Homo heidelbergensis, a group of extinct humans related in many ways to Neanderthals. However, genetic analysis showed that the owner did not share a common ancestor with Neanderthals, but instead with the Denisovans, a mysterious subspecies discovered only in 2008 that last shared an ancestor with Neanderthals and Homo sapiens about one million years ago. This is even more interesting because the Denisovans were initially found in Siberia, which is, needless to say, quite a long way from Spain. Meyer presented three possibilities:

“First, the Sima de los Huesos hominins may be closely related to the ancestors of Denisovans.”

“Second, it is possible that the Sima de los Huesos hominins represent a group distinct from both Neanderthals and Denisovans that later perhaps contributed the mtDNA to Denisovans.”

“Third, the Sima de los Huesos hominins may be related to the population ancestral to both Neanderthals and Denisovans.”