The amazing 32,000 year old drawings in the Chauvet Cave

In December 1994, three explorers made a surprising discovery in southern France - a rumble of stones blocking the entrance to a spectacular cave, over 400 meters long and covered with archaeological and palaeontological remains, including the skulls and bones of cave bears, which hibernated there, along with the skulls of an ibex and two wolves. But it was the human traces that were most interesting... 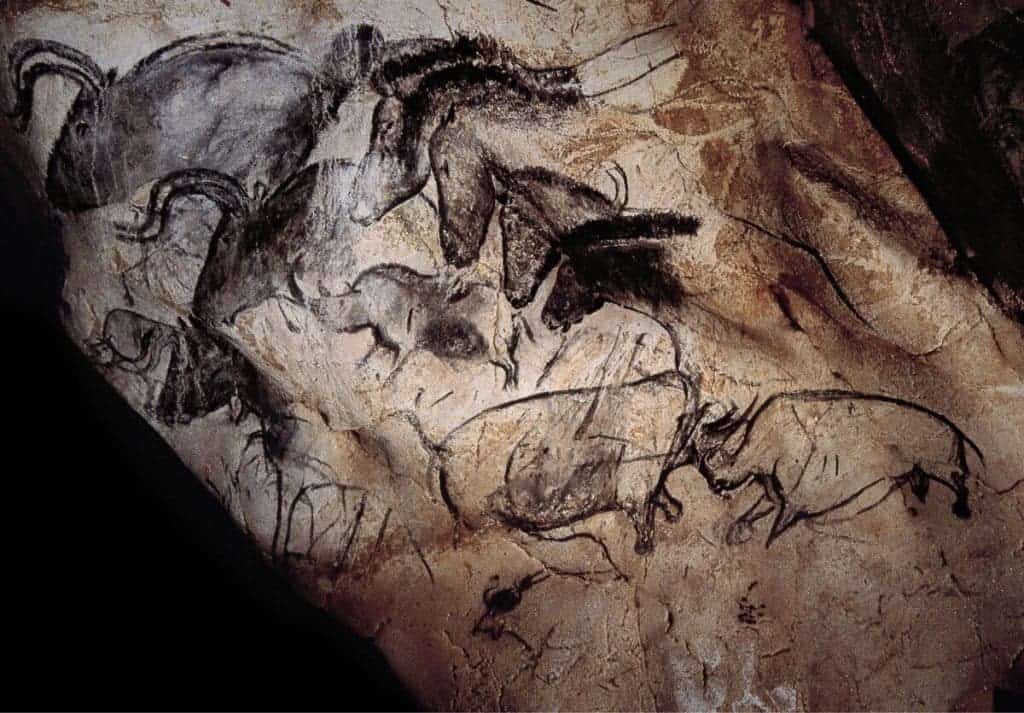 In December 1994, three explorers made a surprising discovery in southern France – a rumble of stones blocking the entrance to a spectacular cave, over 400 meters long and covered with archaeological and palaeontological remains, including the skulls and bones of cave bears, which hibernated there, along with the skulls of an ibex and two wolves. But it was the human traces that were most interesting…

The cave bears also left innumerable scratches on the walls and footprints on the ground. But even more interesting, they discovered that several parts of the cave had been used in different ways by artists. Scientists managed to identify hundreds of painted animals, depicting at least 13 different species, some of which were never found in other drawings.

The paintings themselves are spectacular; to me, the fact that people were able to create this level of art is amazing. Although this is still controversial, many people believe there is also a cinematic aspect to these drawings: since paintings were done in caves, where the only light available was from fire, the flickering of the flame combined with the repeating images makes it seem as if the picture was actually moving. To further strengthen this theory, some animals have 6 legs to make them seem like they are moving.

But these are not just scribbles made by ancient people to pass the time away – there is actually a solid case that these are significant artistic accomplishments; for starters, the dominant species represented in the drawings are lions, mammoths, and rhinoceroses. From the archaeological record, we now know that these species were not routinely hunted by early humans, so these were not hunting stories.

Although like in most cases of cave art there is no complete human figure, the Chauvet Cave features an exceptional image of the lower body of a woman, a “Venus” figure composed of a vulva attached to an incomplete pair of legs. Above the Venus, and in contact with it, is a bison head, which has led some to describe the composite drawing as a Minotaur – although that’s quite questionable. To add even more artistic value, abstract markings (lines and dots) are found throughout the entire cave, and there are also  two unidentifiable images that have a vaguely butterfly or avian shape to them, something which indicates a ritual – some spiritual practice (perhaps shamanic). All these things indicate one thing: these are drawings in the full sense of the word, with a very high artistic value (not to mention the archaeological and historical value).

John Robinson, a British sculpture and coordinator of the Bradshaw Foundation, was lucky enough to be allowed within the cave to offer an artist’s perspective on this. Here’s what he had to say:

“The panel is without doubt one of the great masterpieces of Homo sapiens Art, besides being the oldest. I studied the lines of black edges, and the use of smudging to produce shadow. Then I saw that the artist had highlighted the outer edge of the drawing by chiseling into the white rock surface. The incising immediately brought to mind the wonders of Egypt, but they were done 3,000 years ago.”

… and the science to back it up

As scientific investigations continued, it was shown that the techniques used here were rarely used in other cave art. The walls were initially scraped clear of debris and concretions, leaving a clear surface for the artist to work on. Also, some scenes depict animals interacting with each other, something extremely rare in prehistoric art.

As for the dating, there was some controversy from the starting. According to the initial datings, the drawings “fall into two groups, one centered around 27,000–26,000 BP and the other around 32,000–30,000 BP.” However, Christian Züchner, who relied on stylistic analysis and not direct dating, expressed the opinion that the red paintings are from the Gravettian period (c. 28,000–23,000 BP) and the black paintings are from the Early Magdalenian period (early part of c. 18,000–10,000 BP). As years passed, more and more datings were conducted, and by 2011, two distinct periods seemed to emerge: 35,000 years ago and 30,000 years ago.

Another key element which further supported these conclusions was bear DNA. Along with mammoths and other huge mammals, cave bears (Ursus spelaeus) dominated the European landscape until the end of the last ice age. Aside for the bear depictions, several bear bones were found in the cave. Jean-Marc Elalouf of the Institute of Biology and Technology in Saclay, France, analyzed 38 samples and found that almost all the samples were genetically similar, suggesting the cave bear population was small, isolated and therefore vulnerable. Radiocarbon dating showed the samples were all between 37,000 and 29,000 years old – indicating that that’s when the local population disappeared or moved.

A future for Chauvet

Of course, the cave has been sealed off to prevent damage, and since its discovery (or rediscovery?) in 1994, only 200 researchers a year have been allowed inside. More discoveries are expected to be found in remote parts of the cave as yet unexplored. In recent years, the general opinion on the cave has changed – archaeologists now no longer believe the cave was inhabited, but only that it served as a spiritual area, perhaps where rituals were conducted. If this is the case, then there are likely more pieces of physical evidence waiting to be discovered. There’s a fine line between studying the cave thoroughly and not damaging it.

French authorities have designed a new, fake Chauvet cave, where all the geological and archaeological features, such as paintings and engravings, are reproduced full-size in an underground environment identical to the original one. The visitors will be able to not only see replicas of the drawings, but also experience the sensations of silence, obscurity, temperature, humidity and acoustics, which were carefully reproduced.

But whatever the future will hold for Chauvet, the cave has already made its point: thirty thousand years ago, humans weren’t mindless brutes; they had the ability to create spectacular works of art, and by all accounts, they seemed to have at least a rudimentary culture. In many ways… they were just like us.