University of Leicester announced the discovery of what they believe to be the medieval Grey Friars Church – the almost mythical burial place of Richard III. 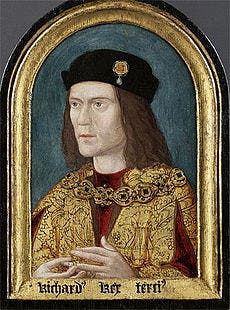 Richard III only ruled England for two years, but his reign was memorable from a number of points of view. He was the last king of the House of York and the last of the Plantagenet dynasty; he was the last English king to be killed in battle, and his defeat at the Battle of Bosworth Field was the decisive battle of the Wars of the Roses – it is also regarded by some as the end of the Middle ages in England.

Archaeologists from the University of Leicester have been leading the search to find his tomb for quite a while now, and they announced they have overcome the first significant hurdle of their investigation, making a huge step forward in the search for the church. In 1485, after Richard was defeated and killed, he was stripped and despoiled, and brought to Leicester to be buried. However, the Franciscan church known as the Grey Friars church was abandoned and the location was lost – until now, that is.

“The discoveries so far leave us in no doubt that we are on the site of Leicester’s Franciscan Friary, meaning we have crossed the first significant hurdle of the investigation. It is remarkable that the third trench has now made us certain that we have located the Friary church – not only a huge step forward in the search for the remains of Richard III, but also important new evidence for one of Leicester’s major religious buildings, lost for over 400 years.”, said Richard Buckley, Co-Director of University of Leicester Archaeological Services, lead archaeologist of the project.

The odds are Richard’s tomb is indeed located in the church they found, but even without it, the discovery is absolutely monumental.

“At the beginning of the project, I cannot say I was completely confident about finding the remains of the Friary, let alone getting closer to the presumed burial place of Richard III. The trenches could easily have missed the structures we have found, had they been located differently, or we could have found that the evidence had already been destroyed by later development on the site.”, added Mr. Buckley.