Usually, it’s scientists who gather the data, but this time, they were the data themselves – a poll of 3700 American researchers showed that a significant portion of scientists are receiving less federal help than they were three years ago, despite spending much more time writing for grants and applying for projects. Nearly one-fifth of scientists are considering going overseas to continue their research due to the low funding climate in America. 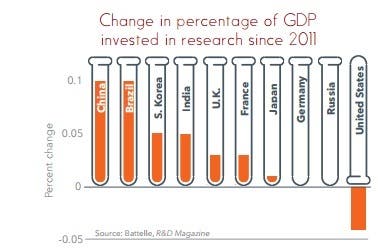 The study was led by the American Society for Biochemistry and Molecular Biology (ASBMB) and it interviewed researchers from all the 50 states, offering online responses in June and July 2013. The report offered a sobering assessment on the poor research conditions: 80 percent answered that they were spending more of their time writing grants now than in 2010, while 67 percent now get less money than three years ago. This has forced them to abandon some of their projects and let go of some of the staff – 55 percent said they have a colleague who has lost a job or expects to soon.

The names of the interviewed were kept secret, though their universities were made public. Here are some of their statements:

“The poor funding climate impacts target and drug discovery in many aspects of biomedical research, including those that have a huge impact on our economy, such as type 2 diabetes, cardiovascular disease and chronic forms of neurodegeneration such as Alzheimer’s.”
— Adjunct Associate Professor from the University of California, San Diego

“We have promising novel therapeutics for a neurological/neuropsychiatric disorder; without funding, we
cannot move it beyond the preclinical phase.”
— Faculty biologist from New Jersey

“New research fuels industry growth. In pharmaceutical product development, industry is cutting back putting more pressure on innovative medical research from the government and other funding (sources). Cutbacks in government funding will limit new medical breakthroughs that are needed to fight disease as well as find products that will reduce medical costs.”
— Senior Director of research and development from a biochemistry company in Illinois

Students and young researchers are suffering just as much, if not more.

“Students have lost access to internships with the U.S. Geological
Survey and the U.S. Forest Service. Positions were cancelled.”
— Faculty geoscientist from Colorado

I highly recommend reading the entire report – it’s truly eye opening regarding research funding in the US.