Book Review: ‘Spaceman: An Astronaut’s Unlikely Journey to Unlock the Secrets of the Universe’

An excellent read for people of all ages and all backgrounds, and a bible for anyone looking to become an astronaut. 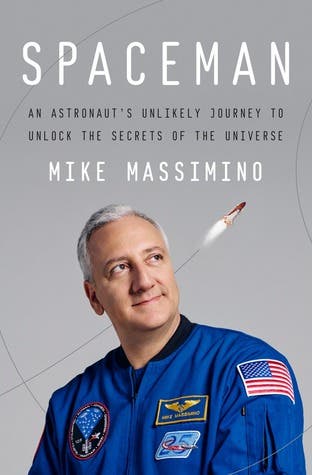 Spaceman: An Astronaut’s Unlikely Journey to Unlock the Secrets of the Universe
by Mike Massimino
The MIT Press, 246 pages // Buy on Amazon

If you ever plan on becoming an astronaut, or if you would simply like to know what it’s really like to go out in space — Spaceman is the book for you.

If you don’t know who Mike Massimino is, then you probably haven’t been following the space program closely. In addition to many contributions, Massimino is one of the spacewalkers who repaired the Hubble Telescope, and he’s also the first person to Tweet from space. Currently working as a professor of mechanical engineering at Columbia University, he flew on two space shuttle missions, in 2002 and 2009 respectively. But more than anything else, he’s a kid who wanted to be an astronaut — and who made it.

From orbit: Launch was awesome!! I am feeling great, working hard, & enjoying the magnificent views, the adventure of a lifetime has begun!

For someone with a career as lengthy and impressive as Massimino, you’d expect a book to be filled with NASA experiences, awesome adventures, and dazzling science — but the first half of the book is just about actually getting into the space program. I absolutely love that!

We cherish astronauts and we talk a lot about them, but we don’t talk nearly as much about becoming an astronaut, and it’s a shame.

So many people dream of becoming an astronaut, but few truly consider pursuing that dream. We see astronauts as heroes, but almost intangible figures, certainly not regular people like you and I. Well, Mike Massimino takes that stereotype and slams it to the ground — with the necessary work, the necessary motivation, and a healthy attitude, anyone can become an astronaut.

The truth is, as Massimino himself puts it, that he is a regular guy. Just like each and every one of us, he had his fears, his self-doubt, and his failures. But he toughed it out. When he felt like he had nothing more to give, he found that extra something to push him forth. His dream of becoming an astronaut had been almost destroyed time and time again, and yet time and time again, he overcame the hurdles. Going through the book, you can almost feel how hard he worked and how devastating the shortcomings were. Honestly, if the book had ended right after he became an astronaut, I wouldn’t be sorry at all. But it goes on.

It goes on to show how more than anything else, astronauts are a family. They stick up for each other and they’re much more than just a team. When they’re successful, they’re all successful together and when they fail, they all fail together. I didn’t think the story can become even more heartwarming, but it does. To me, this was also the most surprising bit of the book. Here at ZME, we talk a lot about NASA’s accomplishments, their studies, their innovative space missions, but we don’t really know that much about what goes on behind the scenes. Massimino offers a candid, authentic recollection of significant events which he and his colleagues went through, and it goes to show that just as much as an astronaut, Massimino is also an excellent storyteller. He makes you want to work at NASA. He inspires you to take a long look at the stars, and reach for them.

To sum things up, this is truly an amazing book written not only by an author who’s been up there with the best of them, but who also has the necessary communication skills to know how to convey his feelings. A book for people of all ages and all background, it’s a must-read for anyone interested in space — and a bible for anyone wanting to become an astronaut.