Learn about the life and tales of Ada Lovelace, the women who wrote the very first computer program in the IXXth century.

by Alexandra Gerea
in Books
Reading Time: 4 mins read
A A
Share on FacebookShare on TwitterSubmit to Reddit 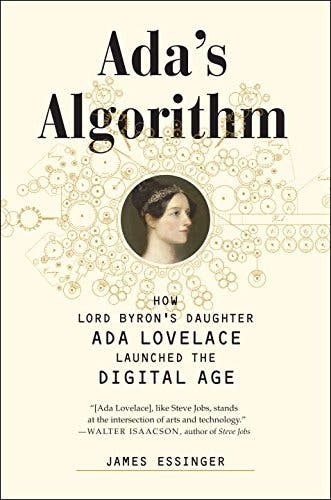 In the past few years the first person that wrote the first computer program received more and more attention; that person is thought to be Augusta Ada King, Countess of Lovelace, or shortly Ada Lovelace. But how is it possible that the daughter of a notorious writer and poet, Lord Byron, wrote the first computer program years before the computer as we know it today was invented, in an era where women did not have much access to information and were not taken seriously by society?

Ada’s Algorithm, How Lord Byron’s Daughter Ada Lovelace Launched the Digital Age, comes up with the key answers to this questions and many more, like: Who was Ada Lovelace? What does a computer program mean for the 1800’s? How did Lord Byron influence all of these? If you want to read about Ada’s computer program itself I am afraid that this is not a book for you, even if the author provides links to some more technical information (like this one, which provides the full explanation of the engines and the algorithms). This book is supposed to offer more information about Ada’s life and those who influenced Lady Lovelace’s work.

It starts with a little bit of description about Lord Byron’s short and notorious life until the moment that he met Ada’s mother, Anne Isabella “Annabella” Milbanke. Sometimes the author provides more information than I wished to know, like the passage where he describes Lord Byron’s affairs, and more about Lord Byron’s life than I expected, but I think that one of the purposes of this book is trying to figure out everything about Ada’s way of thinking and personality by studying her roots.

Because Ada’s mother, Annabella, was really sick of Lord Byron’s behavior and she did not want her child to become just like her father, adventurous and daydreaming, Annabella did everything she could to prevent Ada from growing into a wild young woman. I think this is one of the key moments in Ada’s life. Because of her mother’s frustrations Ada was basically forced to learn mathematics from a young age and become more of a rational and logical person.

The second important person of her life was the mathematician and inventor Charles Babbage, which is considered the ”father of the modern computer”. Even though, as you will find out from the book he actually never finished his differential nor his analytical engine, he still influenced the computer revolution.

And now finally the interesting part comes, how all of these influenced Ada to write the first computer program. It seems that she did it back then when the idea of an algorithm was not even invented, even though nowadays it is more like common sense for us. Ada helped Babbage with his analytical engine by simply trying to put down on paper how the engine should do the mathematical calculation in steps: “Note G is especially relevant to us today. It describes step by step, in detail, the operations through which the punched cards would proceed to weave an even longer sequence of Bernoulli numbers on the Analytical Engine. Note G is highly complex, juggling mathematics and technology. Most important of all, it is in effect a program containing instructions for a computer.” The author emphasizes that the duo never used the word computer in their letters or any other writings with the same meaning that we use today, though they used it several times with the meaning of a clerk that carries out arithmetical and mathematical calculations.

The thing that I enjoyed the most is that the book also contains some of Ada’s letters to her mother and even Babbage. I find the idea of actually reading and seeing how Ada used to think and talk amazing. What I also liked about the book is the fact that even though it is written and published recently it still makes me feel like I am living in those times.

All in all, Ada’s Algorithm is a book about the whole picture of Lady’s Lovelace environment and background and also provides information from the beginnings of her father’s life, including details about almost every person that may have influenced her life and her work on first algorithm, until she passed away at the age of 36 (the same age as her fathers) killed by cancer.

As I said at the beginning, the book’s purpose isn’t to explain her inventions, but the whole picture of events and people that made possible the creation of what it might be the first computer program  in 1843. I would really recommend this book for people looking for valuable insight into Ada Lovelace’s life and the emergence of modern computers.